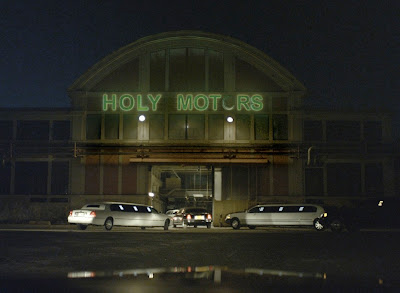 He rises from bed in the night, steps over a dog, and carefully feels his way along an expanse of wallpaper—like May in her membranous motel room in Sam Shepard’s Fool For Love. He’s seeking a portal, perhaps to another dimension, perhaps just to a movie theatre, this man who, we’ll soon realize, can become anyone. (He’s played by who else but the inimitable, intensely physical actor Denis Lavant.) We call this man Monsieur Oscar, and once he finds his way through that papered wall and, it would seem, down some sort of rabbit hole, we then cut to the start of his workday, though surely Oscar’s strange activities, each of them supernatural feats of role-play for clients never identified and for purposes left obscure, should best be considered a vocation, or even a cosmic obligation. 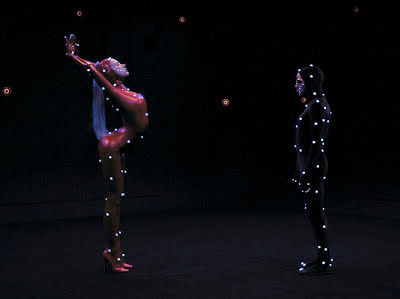 In suit and tie, Oscar leaves his compound, cheerfully waves adieu to the kids, passes by his ample security staff, and enters his stretch limo, which is piloted by Oscar’s Girl Friday, a slim, ivory-haired, ravishingly beautiful septuagenarian (Edith Scob, most famous as the titular non-visage in the horror classic Eyes Without a Face). She alerts him to the day’s itinerary. Oscar prepares for each of his  gigs from his mobile office, which is equipped with a bulb-framed mirror, costumes and make-up. (Only Cosmopolis displays a car with more vital amenities.) First stop: Oscar disguises himself as a hunched-over old lady muttering to herself on a busy bridge. Soon after he’s donning a black full-body jumpsuit adorned with little white balls and entering a Tronosphere, where he meets a similar female creature in similar garb with whom he play-fights and faux-sexes with acrobatic panache. Is this already sounding weird? People, you all don’t know the half of it. 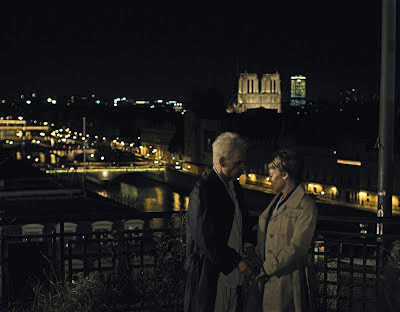 Maybe Monsieur Oscar is simply the world’s hardest working actor. Maybe, like the hapless hero of Ursula K. LeGuin’s novel The Lathe of Heaven, he’s simply trapped in an existence that morphs every time he turns around, and all he can do is adapt. Maybe Leos Carax, the compulsively inventive writer/director of Holy Motors, just wants to send Levant—his ferociously talented muse, Harpo Marx, Jacques Tati, Jackie Chan and Lon Chaney all rolled into one wiry, putty-faced Frenchman—on a paid holiday to an ever-unfurling dreamscape, made of one-part reality, one-part unconscious roaming, one-part cinephilia. There’s no road map for Holy Motors, so best do away with your search for clear answers from the get-go. You’ll have more fun that way. 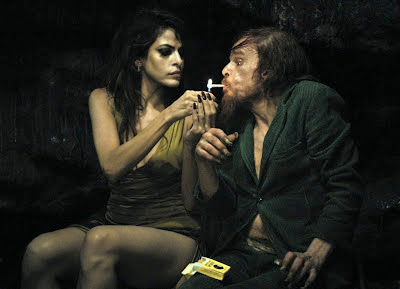 For those who saw the recent anthology film Tokyo!, you’ll be pleased to discover that Carax has resurrected Levant’s milky-eyed, mayhem-making leprechaun, who this time around surfaces from a Paris sewer, gobbles cemetery flowers, bites the fingers off a fashion photographer’s assistant and abducts a zombified Eva Mendes from a glamour shoot. Later Oscar will enter an abandoned warehouse full of mannequin parts and meet up with Kylie Minogue, a fellow career changeling, or maybe a secret agent, from somewhere in his past, and she’ll sing a sad and powerful song that asks ‘Who Are We?’ The unbearable truth is that the answer just keeps changing, scene by scene, moment by moment, as does this luxuriant, restless, ultra-bizarre and hugely enjoyable film. Identity is fluid: this is a fact that also makes for great fantasy, a fantasies at the heart of movie-love. This movie understands that fantasy like few others do.
Posted by JB at 11:44 AM 2 comments: Links to this post 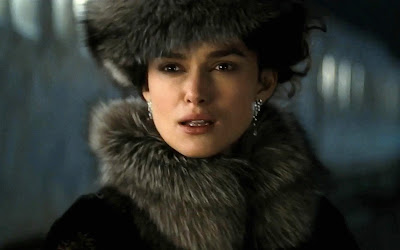 English director Joe Wright can marshall the teeming forces that constitute the cinematic apparatus on the grandest of scales with a tremendous fluidity. And, boy, nobody knows it better than him. If there was ever any chance of the cameras simply bearing witness to a shift in thought, atmosphere or emotion in his new adaption of Anna Karenina, Wright has done a painstaking job of ensuring that any such event was quashed under a behemoth of elaborate tracking shots, movable décor and razzle dazzle choreography. Not a whole lot of slipping elegantly between the internal musings of various characters here. Doesn’t sound much like Tolstoy does it? I suspect fidelity to the source material was not high on Wright’s priority list. 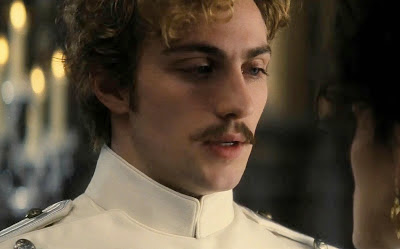 This Anna has a big design concept at its core, though the execution of this concept is hardly consistent. All the world’s a stage—until it isn’t. The first several scenes of this spin on Tolstoy’s sprawling, multi-character tale of marital infidelities and class angst in 19th century Russia are confined entirely to a baroque theatre, with Anna (Keira Knightley) arriving in Moscow to help rescue her brother’s damaged marriage and soon after becomes inexplicably entranced with the young military officer Vronsky (Aaron Taylor-Johnson). The way Wright shifts from scene to scene by using toy trains, fake snow and sweeping gestures is undeniably virtuosic and increasingly tedious. If there is any real tension, sexual or otherwise, between Knightley and Taylor-Johnson, it gets lost in all the swirling, swooping and cutting. But, hey, they look great in those costumes, and Taylor-Johnson’s blue eyes really pop when underlined by that blonde moustache. 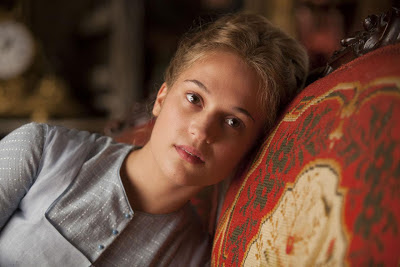 Some interesting casting: Jude Law plays Anna’s ultra-reserved husband, a government official. I guess someone figured it was Law’s turn to get cuckolded for once, and the actor does some impressive work here, invoking a mixture of repressed pain and rage doing internal battle with a desire to be forgiving and above it all. Elsewhere we find a very interesting, clearly devoted young actor named Domhnall Gleeson playing Tolstoy’s other protagonist Levin, the young man who flees affluence to join the workers in the fields and admire nature in all its ferocity and splendour. Gleeson’s nicely complimented by the Swedish beauty Alicia Vikander, who plays Kitty, the girl of Levin’s dreams who initially turns him away in favour of Vronsky. For some reason these actors have much stronger, subtler scenes than those shared by the stars. Do Wright and playwright Tom Stoppard, the film’s scenarist, simply believe in true love between the young and innocent while disbelieving in the operatic lust and longings indulged in by the slightly older cheaters and manipulators? I suspect that this contrast has more to do with Wright’s knee-jerk response to drama, already more than evident in earlier films like Pride and Prejudice and Atonement: the bigger the stakes, the more you got to dress it up! 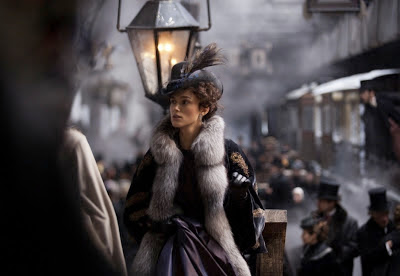 I applaud chances taken with form and I have nothing against a little flamboyance, but the endless directorial flaunting in Anna just doesn’t connect to the material in any sort of sustainably interesting way. Heartless pizazz doesn’t make for much catharsis, and even the merciless wheels of a train can’t conjure much feeling for the fate of poor Anna K.
Posted by JB at 11:35 AM No comments: Links to this post