Strangers in the afternoon 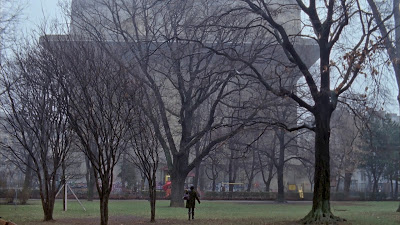 The woman is here because her cousin is in hospital, comatose, slowly dying, with no one to stay by her side, hold vigil. The cousins knew each other as kids, barely know each other as adults. But there’s no one else. The man is here because he’s always here, not at the hospital, but at the Kunsthistorisches Museum, where he works as a guard, a tranquil sentinel holding vigil over centuries of art. The woman visits the museum and, later, the man will accompany her to the hospital—this is the story of a friendship. Were that it had some deeply sinister edge, Museum Hours would resemble some unsettling fiction by Marguerite Duras, or perhaps Julio Cortázar. But writer/director Jem Cohen takes a very different sort of risk, resisting the pull of drama so as to let the connection between these two not-young characters, between their disparate experiences of art and life, blossom in it’s own good time. Film is an audiovisual medium, but some films are more about seeing and hearing than others. This one is exquisitely attentive to both. 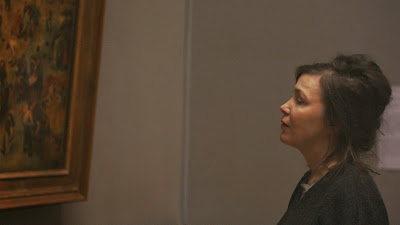 Hearing: for several scenes I kept hearing Anne’s voice and thinking, my god, she sounds like Catherine O’Hara. Later on Anne sings to her comatose cousin in the penumbra and it finally dawned on me: she sounds like Catherine O’Hara because she’s Mary Margaret O’Hara, the wonderful, legendary Toronto singer, sister to the beloved Toronto-born comedienne, whose face I’d never have recognized, having only seen her once before, when she made a surprise appearance at a Bonnie ‘Prince’ Billy show I attended some years back. Cohen often collaborates with musicians and O’Hara is a truly inspired choice for his co-protagonist, with her warm yet eccentric energy and that sense of something always hidden without seeming especially furtive or cultivating an air of mystery. 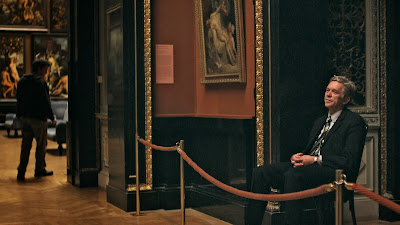 Johann, the guard, is portrayed by Bobby Sommer, who’s also spent his life surrounded by music, as a roadie in ’60s London and a concert promoter and tour manager in ’80s West Berlin. The exceedingly mild-mannered Johann shares stories of his rock ’n’ roll past with Anne that overlap in may regards with Sommer’s. The exchanges between Anne and Johann in the museum and hospital, in taverns or during a tour of the local grottoes, flow easily and naturally, a balm to ease the strangeness felt by the Canadian woman, visiting Vienna as a sort of designated mourner. 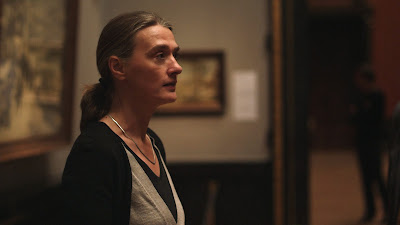 But Museum Hours, set in the mist-draped city where the study of art history originated, much of which unfolds at the Kunsthistorisches, much of which is given over to languorous gazes at Breughels and other paintings—not to mention at the varied visitors to the Kunsthistorisches, whose gazes are a fascinating subject on their own—is most obviously concerned with seeing. Yet Cohen doesn’t instruct us on how to regard art. He gives us space and time to do so in our own way, to look and wonder free of the burden of excessive contextualization. Both museum and hospital trade in silence, offer refuge, demand only patience. Between these spaces the characters, and we, enjoy spells of escape. The cumulative effect is could be regarded as a more somber Lost in Translation, yet that somberness is entirely earned, feels totally genuine, and leads to a quiet transcendence quit unlike anything the movies usually offer.

Posted by JB at 3:39 PM No comments: Links to this post 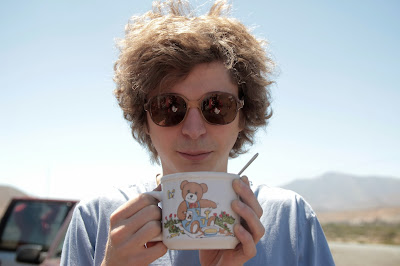 We meet Jamie at a Santiago house party. He looks like an unusually tall child but must be at least in his early 20s. The luggage under his eyes speaks to a penchant for partying that’s confirmed by his faux-cheerful complaints about the lack of good coke and weed in Chile. He seems to know a little Spanish but doesn’t much bother with it. He’s kinda cute, but also childish, arrogant and impatient. He brags an awful lot about stupid shit, keeps wedging his readings of The Doors of Perception into casual conversation, has a way of taking up more than his share of space and expects everyone to adhere to his timetable, even when he doesn’t. Jamie’s played by Michael Cera—perhaps it takes a Canadian to fully embody the Ugly American. 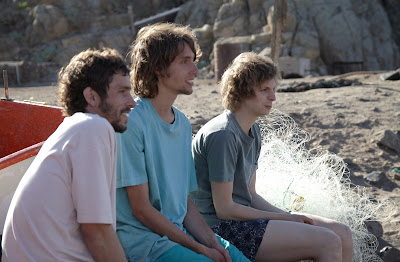 Crystal Fairy & The Magical Cactus and 2012 was churned out while Cera and Chilean writer/director Sebastián Silva (The Maid) were trying to complete their other recent collaboration, Magic Magic. It’s an enjoyable comedy with a strong sense of those very particular friendships that develop when you’re young and traveling, when eagerness to find companionship and lack of fluency in any shared language helps to forge otherwise unlikely alliances. It’s shot in an uninspired but functional style, like a well-lit home movie—the handheld camera mostly just points at whoever is talking. The scenery becomes quite lovely however once Jamie is taken by three Chilean brothers (Juan Andrés Silva, José Miguel Silva, Agustín Silva) to the coast. Along the way they search for San Pedro cacti from which to extract mescaline and find themselves picking up another errant American, a wildly flamboyant flake named Crystal Fairy (Gaby Hoffmann). Jamie actually invited Crystal to join in on their excursion when the two met at the aforementioned house party, but he forgot all about their encounter sometime between inviting hookers over to his place for supper and sleeping in. When Crystal turns up as planned Jamie keeps trying to ditch her, but the brothers, far more gentlemanly than Jamie, insist on letting her stay. 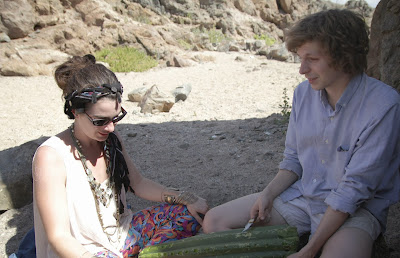 With those brothers relegated mostly to the background, alas, Crystal Fairy mainly focuses itself on the contrast between the damned Yankees: Jamie, the selfish if amusing and intermittently affable prick, and Crystal, the sort of cosmic traveler who blesses objects, claims past-life recognition, is ostentatiously down with nudism—at one point, after catching sight of her ample bush, Jamie dubs her Crystal Hairy—and, for all her attempts to impose New Agey rituals upon every situation, is just a very nice person. By the film’s end, which involves a rather forced moment of deeper sharing between our quintet of hallucinating campers, we’ll see that Jamie and Crystal really aren’t so different after all. The script is pretty undercooked, but the performances feel very lived in, the character types and their drug experiences resonate, and after a few early scenes that make it uncomfortably easy to mock Silva’s sole female character, the film finishes with a gesture of genuine empathy for all involved. Unimaginative, but not a bad trip.

Posted by JB at 3:14 PM No comments: Links to this post

Sex and the synthetic girl(s) 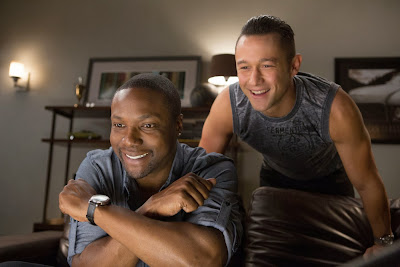 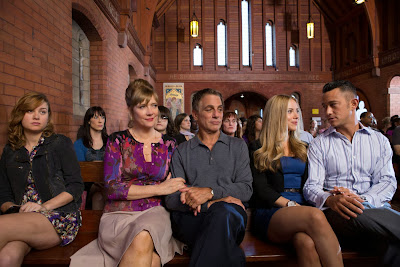 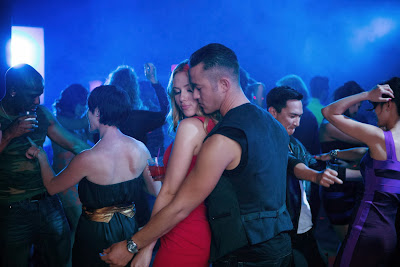 Who’s Barbara? She’s the "dime" (surely you didn't think women would  be spared from the characters' knee-jerk commodification?) that makes Jon wait for once. Rather than letting him into her bed, she makes Jon cream his jeans in the hall while talking in wanton tones about his attending night school and introducing her to his family. She is, we’ll swiftly discern, a mercilessly controlling sexist snob who won’t tolerate the idea of Jon cleaning his own apartment—another of his most beloved pastimes. Jon Sr. (Tony Danza) calls Barbara “a woman who can make a boy into a man,” which is another way of saying a mother. Barbara is one of three mother figures in Don Jon, the other two being Jon’s actual mother (a wonderful Glenne Headly) and Esther (Juliann Moore, also excellent), the older woman Jon meets in his night class who is at once a wildly eccentric, emotionally devastated mess and pretty much the only mature adult in the movie—not possessing the mentality of a 12-year-old, Esther, unlike Barbara, isn’t irreparably scandalized by Jon’s porn-love. 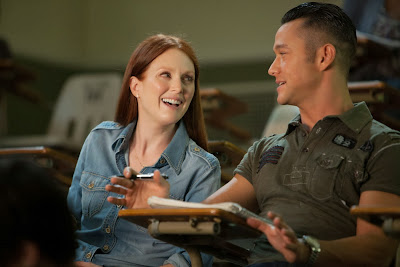 Detour as narrative on the streets of Austin 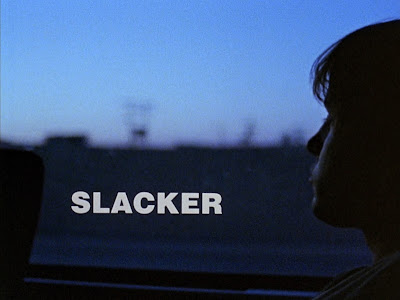 A man arrives in Austin, Texas. It’s 1989. He took the bus here, and seems to have been traveling a great deal. He leaves the station, gets in a cab, lets loose a monologue in which he describes a dream in which he read a book about splintering realities, different dimensions, other versions of himself and of everybody else, even his possibly mute employee of Roy’s Taxi currently driving him around. Soon both dream-raconteur and his stoic audience-of-one slip into the background, making way for a guy in a BE ALL THAT YOU CAN BE t-shirt watching super-8 home movies, for a cheerful babbling conspiracy theorist, for a pedantic youth pontificating on idleness as a route to liberation, for some dude who says he can get three girls into a gig but actually can’t, for a self-described “anti-artist” who claims to destroy works of art (I wonder if he went on to become a film critic), for a young woman who claims to possess Madonna’s pap smear—she knows a gynecologist in Hollywood. Who is the hero of this movie? The answer, of course, is everyone. 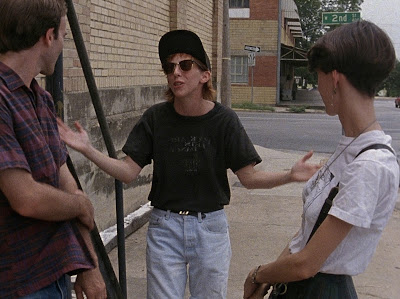 Slacker (1991), Richard Linklater’s second feature and a key work in the story of American independent cinema, is one of those rare films that succeeds at pluralizing the protagonist, at capturing a community, a spirit, a place and time—the anniversary of the moon landing, the ’88 presidential election, the leaning towers of VHS tapes and the death of L. Ron Hubbard all provide Slacker with a timestamp. Employing what Linklater described as a “vertical narrative,” the movie moves like a narrative relay race in which no one is in a hurry. The story, as such, goes wherever the next character takes it. The production company is titled ‘Detour,’ a nod to Edgar G. Ulmer’s beloved poverty row noir, but also a directive for a trajectory devoted to alternate routes. The movie seems inspired by late period Luis Buñuel; it is rigorously associational. Which is not the same as random—Slacker’s cast are very much all of the same world, sharing many of the same preoccupations: the unseen hands that control modern life; freedom as something inherently elusive, given our insistence of laying traps for ourselves (a theme explicitly alluded to in the title of Buñuel’s The Phantom of Liberty); and the potential heroism in passivity. 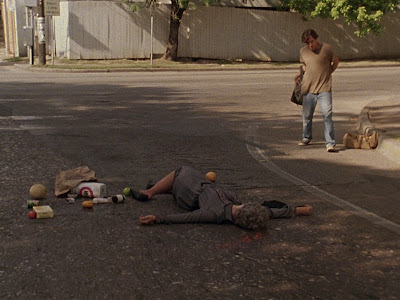 This last theme isn’t mere irony or slacker bravado. The notion of passivity as being socially useful is critiqued in Slacker’s very first transition, when numerous passersby come upon the unconscious, possibly dead victim of a hit-and-run splayed out in the road and each of them passes the buck, uninterested or unwilling to get involved. There is a dark side to this seemingly mirthful, seemingly humanist, seemingly ambivalent movie whose title is totally misleading: this project was a tremendous, ambitious undertaking, and Linklater, still in his 20s at the time, was anything but lazy. He would soon after prove to be one of the contemporary cinema’s most prolific directors, with an astonishing range of works under his belt, most notably Dazed and Confused (1993), School of Rock (2003), the Before… trilogy (1995, 2004, 2013), and Waking Life (2001), which unfolds like a series of dreams and to which Slacker is most closely related—Slacker’s first line: “Man, I just had the weirdest dream.” Previously available only on DVD, Slacker is now available from Criterion on a lovingly packaged new blu-ray edition. It remains striking original, frequently hilarious, at once loose and mesmerizing, and an inspiration for anyone who feels cinematic form to be riddled with constraints.
Posted by JB at 3:50 PM No comments: Links to this post