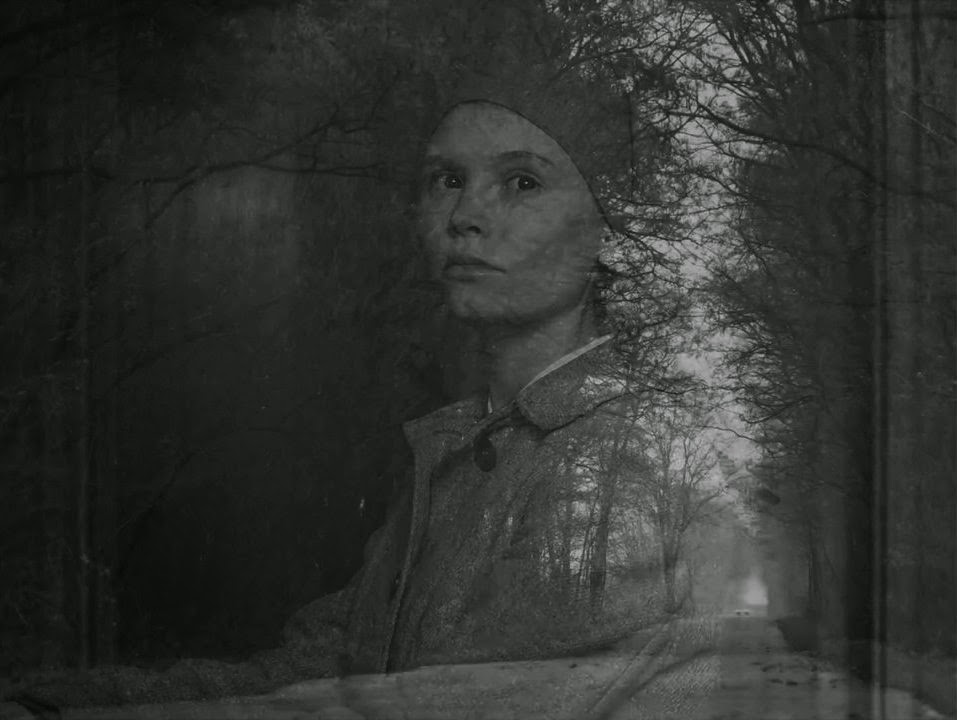 JB's a bad blogger! It's true, I have been neglectful of late with the posts. Genuine busyness and occasional cynicism are my only excuses. I will heretofore attempt to make amends, dear readers. (That was plural, which implies my cheerful assumption that you are more than one in number.) Now that we are in the hazy hot days of summer, let us turn our attention to winter... monochromatic winter! And Poland. And nuns...

Ida follows a young orphan raised in a convent who, on the verge of taking her vows, learns that she has an aunt living in a nearby city. The orphan shows no curiosity but her Mother Superior obliges her to visit this aunt before devoting her life to Christ. The orphan’s name is Anna, but upon meeting Aunt Wanda, a former state prosecutor, Anna learns that her real name is Ida, and, what’s more, that she’s Jewish. A revelation under any circumstance—especially if you’re about to become a nun!—but this is Poland, 1962, where being the orphaned daughter of Jews automatically supposes a link one to the single greatest atrocity of the 20th century. Ida’s parents disappeared during the war, and hardboiled Wanda has just enough information and just enough sympathy for her reticent niece to initiate what will become something of a road movie and something of a detective story, a journey to unearth the truth about Ida’s parents. 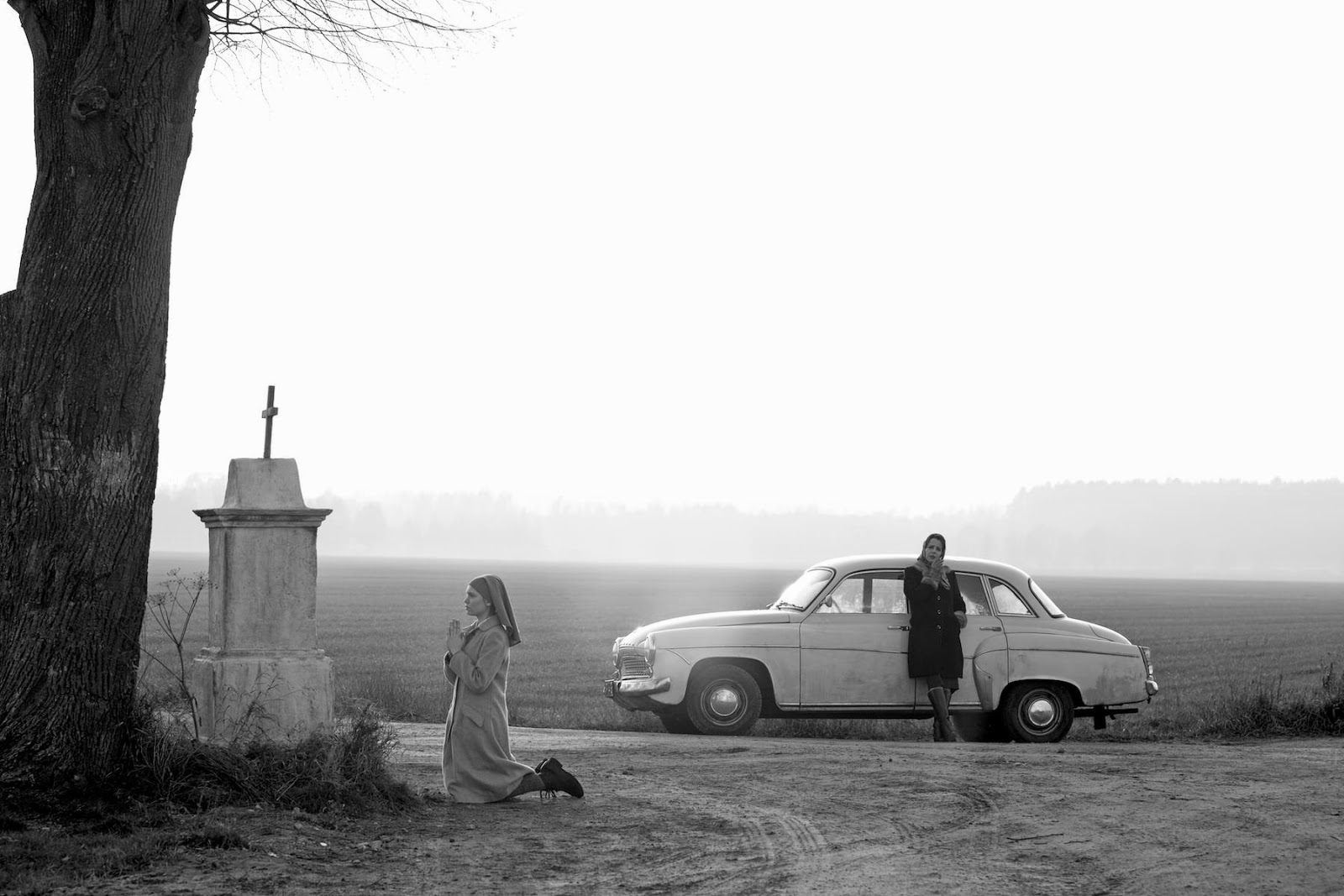 Directed by Paweł Pawlikowski (Last Resort, My Summer of Love) and written by Pawlikowski and British playwright Rebecca Lenkiewicz, Ida, clocking in at a trim yet unhurried 80 minutes, unfolds in the exquisite, captivating manner of a precisely sculpted novella. Every scene is infused with quiet mystery, yet in hindsight every moment is essential. Credit for the mystery and compaction both should be divided between numerous artists, of which I’ll name just a few. Ida is played by Agata Trzebuchowska, Wanda by Agata Kulesza. With her opaque, liquid eyes refusing entry, that chin dimple like the mark of some chosen one, and those wide, childlike planes of her face always catching the ashen winter light, Trzebuchowska is a presence at once luminous and demure. Kulesza conveys a wizened weariness that gradually shifts from sly cynicism toward something more heartbreaking. Ida and “Red Wanda” make a fascinatingly idiosyncratic pair, one a genuine innocent protected from earthly vice by her stoicism and nun’s habit, the other a lonely, cold-eyed if still seductive woman somewhere on the far side of middle-age who smokes too much, drinks too much, and sleeps with men out of habit—a character made by complicated by her past participation in the 1950s show trials that brought opponents of socialism to their knees. 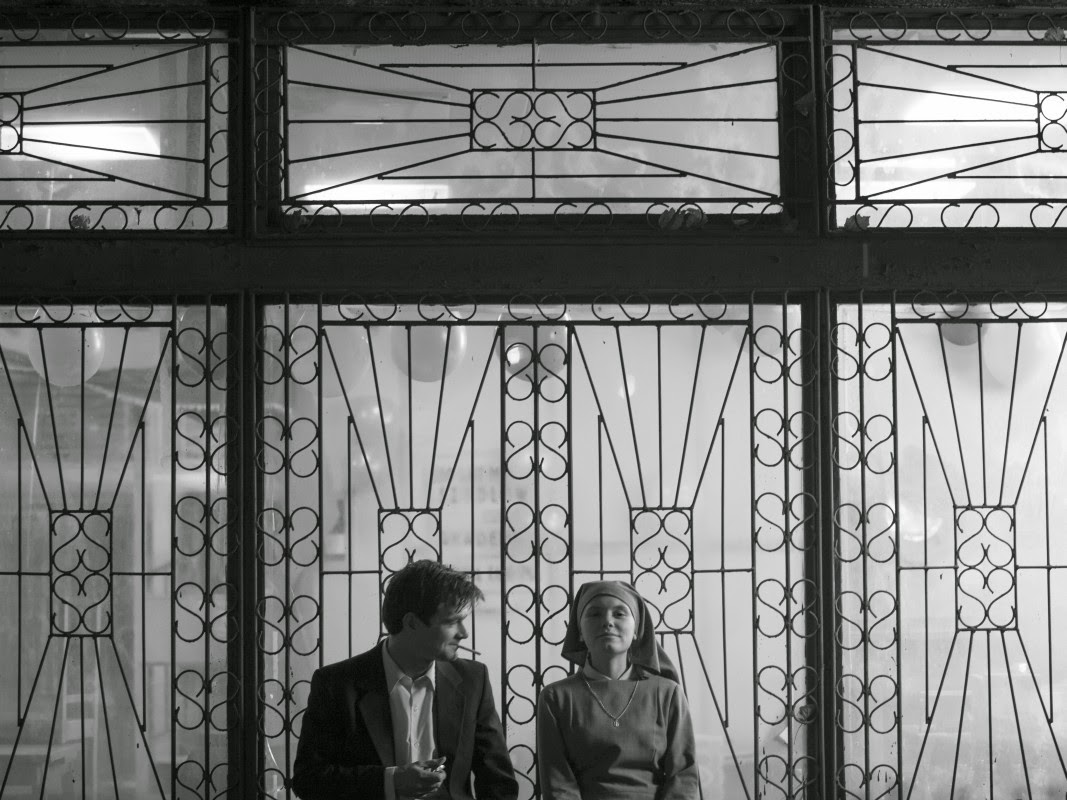 Confined—and liberated too—by the boxy, Academy ratio frame, Lukasz Zal and Ryszard Lenczewski’s stunning silvery black and white cinematography frequently places the characters at the bottom of the image, leaving space overhead for architecture, freshly dug earth or the heavens to loom like some elusive god, uncertain future or harrowing family legacy. Before it even begins Wanda teasingly warns that their journey might end with Ida discovering that there is no God. And indeed, as this story makes its serpentine way there are moments when faith seems in question and unholy new routes open themselves for Ida. Whatever routes she follows, whatever distance she travels, there is however always a sense that Ida is about wayward paths to devotion. And to self-realization, for this young orphan, and for a country still reeling from one trauma and deep in the grips of another.
Posted by JB at 6:12 PM No comments: Links to this post

Modern love in the shadow of the city 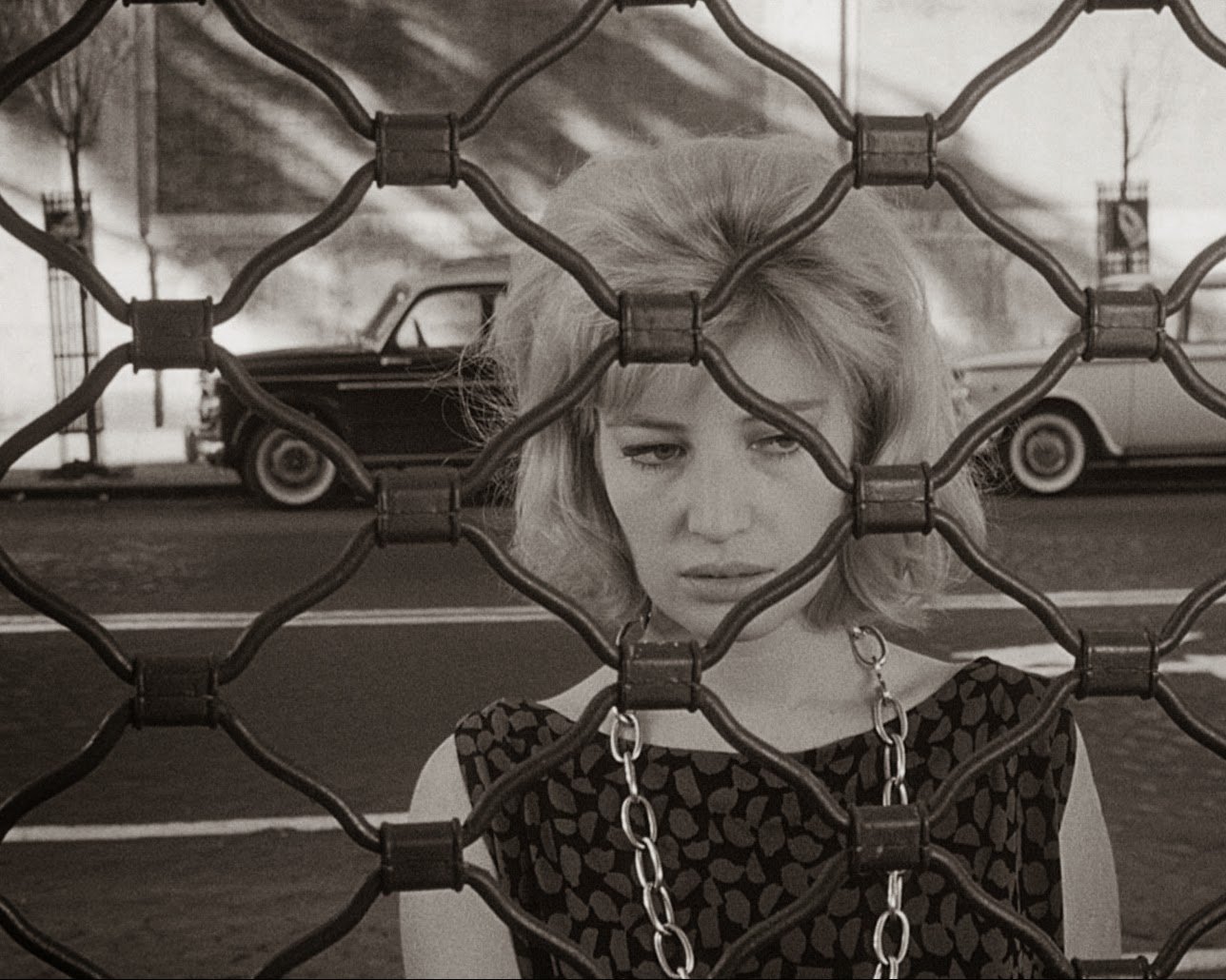 The final film in what would retroactively be considered a sort of loose trilogy—three inimitable modernist films about modern eros, modern cities, modern business, and modern ennui—L’eclisse (1962), for all its wandering ways, does indeed infuse the air with some sense of conclusion. The story of a young translator who slips out of one love story and into another, it was Michelangelo Antonioni’s last film in black and white and it pushed his proposition regarding landscape, architecture and objects as narrative tools on par with actors to dizzying heights: the dominance of a lampshade, a column, an unfinished building or an immense cloud in a given frame needs to be regarded as content, not décor. (Is L’eclisse, so light on plot, boring? Only if you have no interest whatsoever in looking at things.)  L’avventura (1960) famously shaped itself around a mystery never resolved, but L’eclisse, in its exquisite final sequence, in which Antonioni leads us on a tour of places already visited the story’s lovers—places now punctured with their absence—actually leaps ahead of the action to imply an inevitable ending. The lovers are last seen together swearing to see each other again later that night, the next day, the day after, and so on, but Antonioni’s ingenious closing montage uses landscape, architecture, objects and our memory of them to acknowledge that this love story will soon draw to a close that need not be dramatized here. 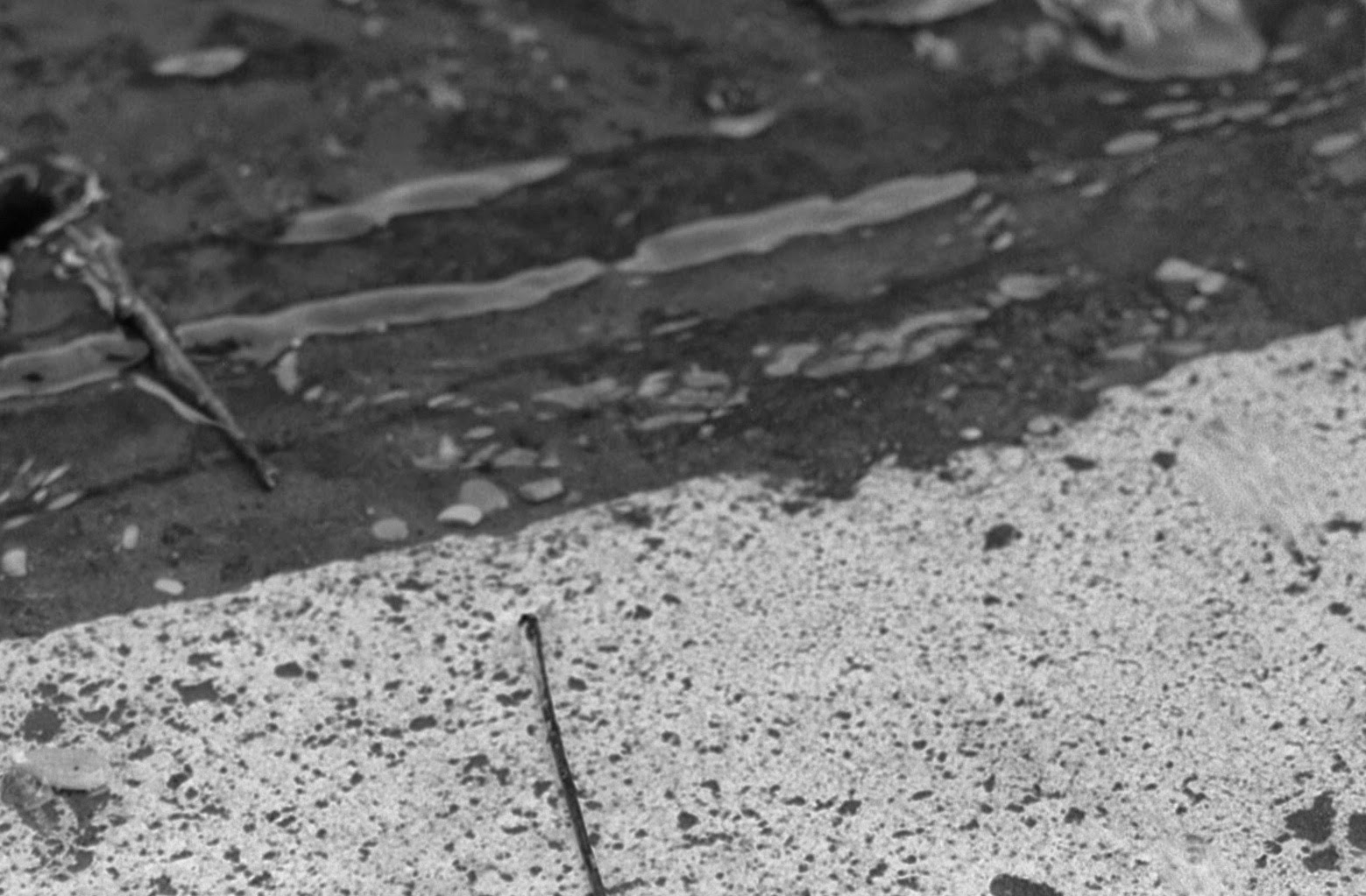 We meet Vittoria (Monica Vitta, one of Antonioni’s chief collaborators during this time) on the morning that she breaks it off with her fiancé (Francisco Rabal). Whatever tempests accompanied their negotiations dwindled into weary resignation by the time we catch up with them. That exhausted morning gives way to a frenetic afternoon in which Vittoria visits the Roman stock exchange to find her mother and meet the handsome, energetic young stockbroker (Alain Delon) her mother employs—a future lover to eclipse the past one. Romances perish, fortunes are lost and a stolen car becomes a watery death trap over the course of L’eclisse, but where such drama would normally occupy the foreground of a conventional drama, Antonioni places no special emphasis on them. Instead he’s interested in studying Vittoria as she drifts through the world, and in her largely happenstance way studies that world. No one explores and marvels over urban topography like Antonioni, and Vitti was his most captivating surrogate. In a film fraught with unease, Vittoria can frequently be found discovering peculiar sources of wonder: the staggered percussive musique concrete of flagpoles swaying in a wee-hour breeze or a day’s journey by small plane to Verona (the setting of the most famous story of star-crossed love in history). Vitti is angular and fascinatingly gorgeous, but more importantly she conveys a stubborn, almost naïve wakefulness in these films that are always in danger of feeling merely defeated. Her gaze is ever-curious, her slender hands always curling around things, if never quite grasping them firmly. Is Antonioni directing her or she him? The Antonioni-Vitti collaboration is among the most important in cinema history. 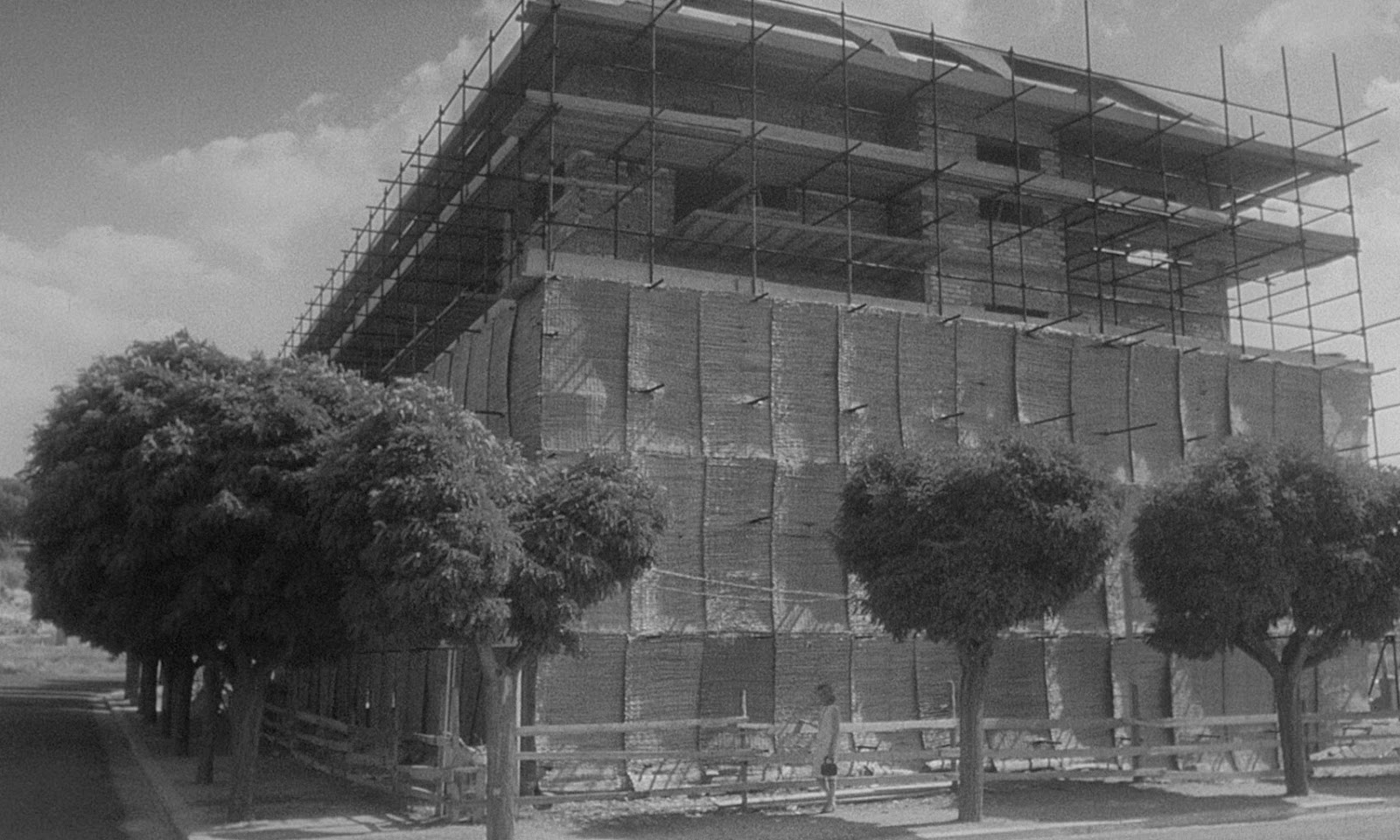 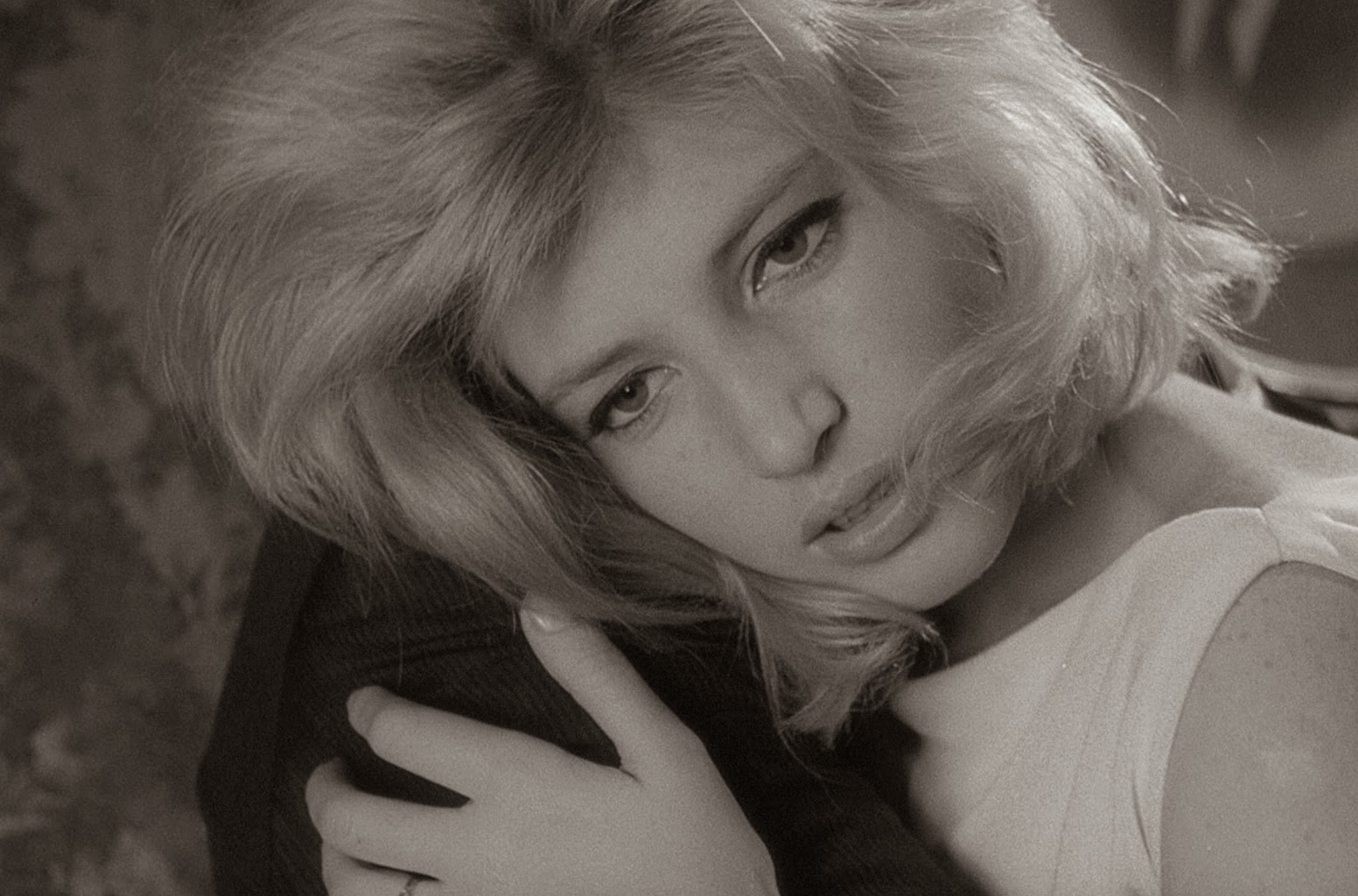 Criterion’s new DVD/BD release of L’eclisse comes out this week. The transfer looks immaculate and the best supplements include an audio commentary from film scholar Richard Peña, a video essay and interview with Italian film critic Adriano Aprà and Antonioni’s friend Carlo di Carlo, and a written essay by Jonathan Rosenbaum.
Posted by JB at 11:42 AM No comments: Links to this post

Keeping his inner dog on a leash 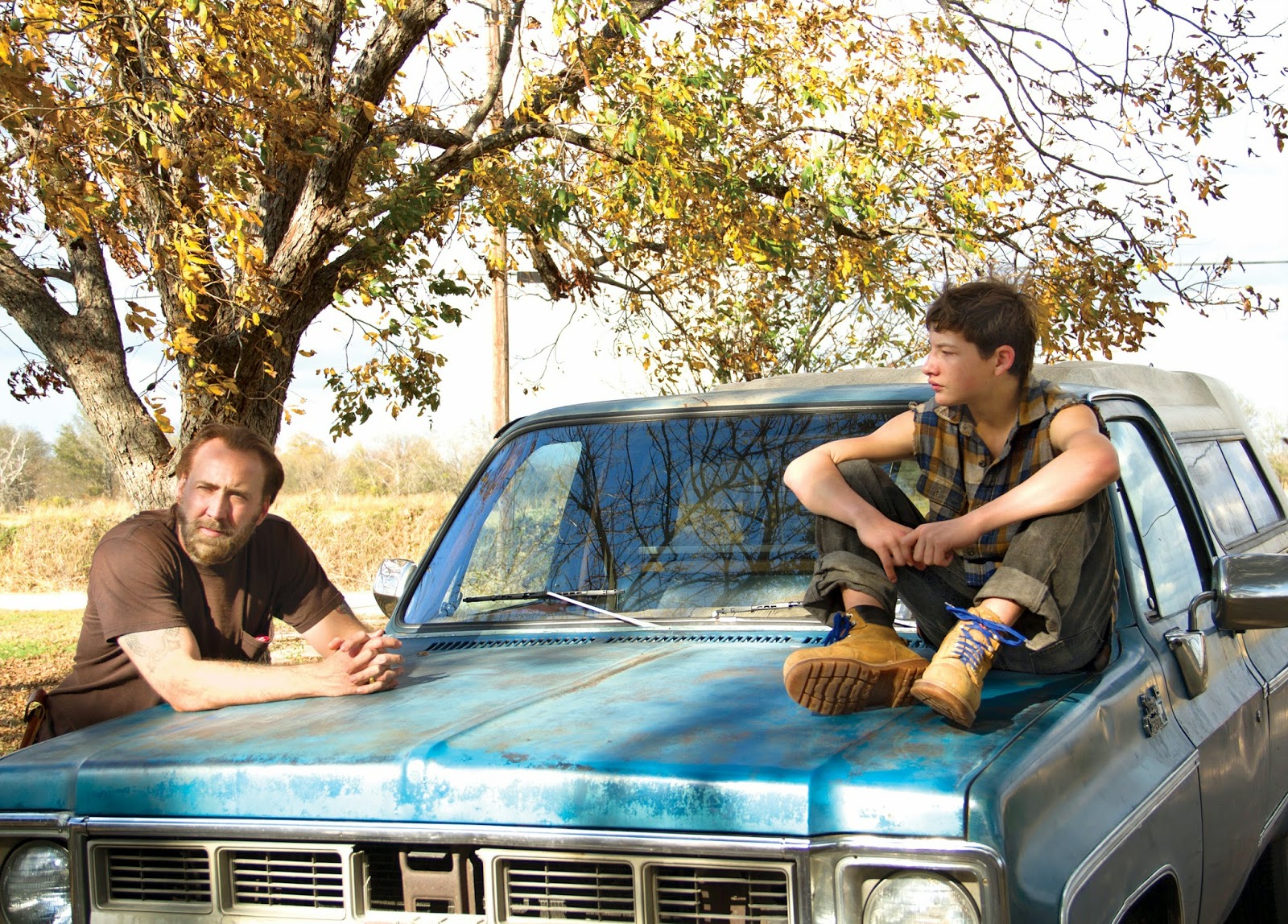 Based on the 1991 Larry Brown novel, Joe, written by Gary Hawkins and directed by David Gordon Green, unfolds in some ramshackle hamelt tucked in Texas backwoods, a place of trucks, dogs and guns, where most adults seem if not drunk then en route. The story drawn from this place is familiar but infused with immediacy, bracingly bleak, very much alive, a study in violence passed through genes and ordinary terrorized homes, a violence most prevalent in men and beasts men keep as companions. If I told you there’s also milky glimmers of human beauty in this place would you believe me? 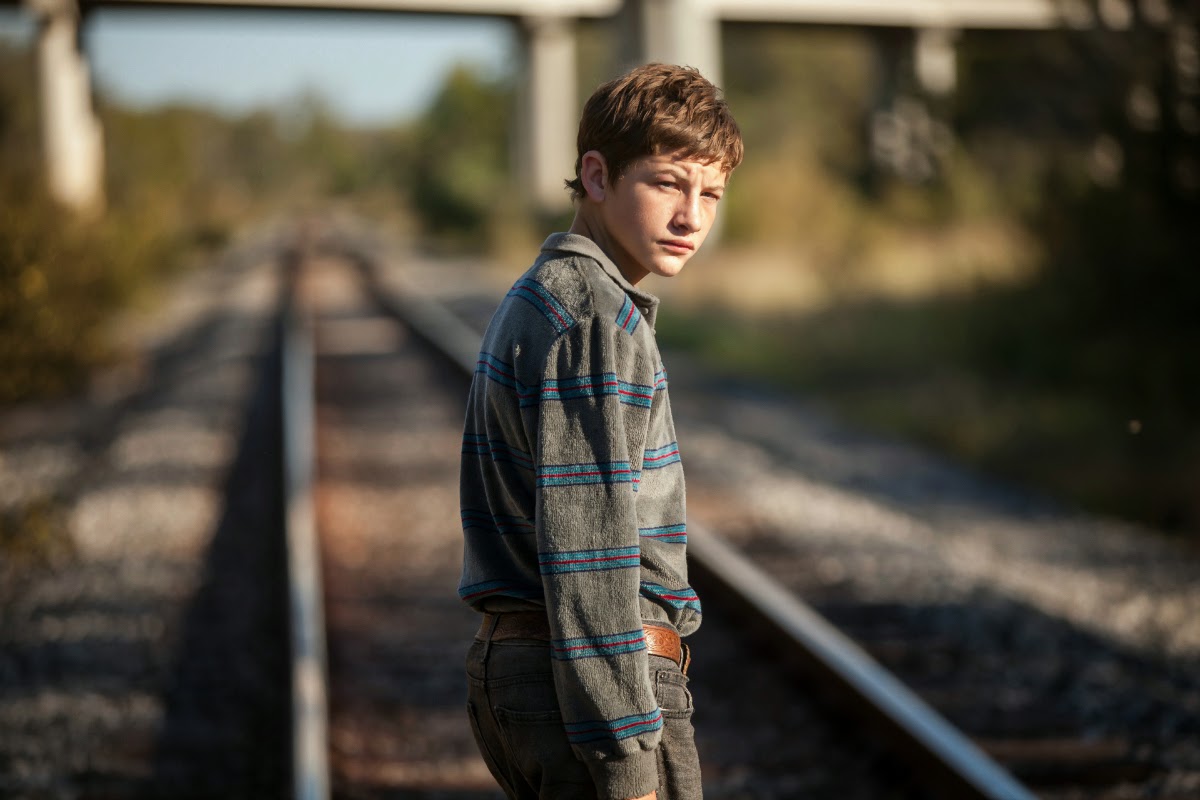 You might if you know Green’s work. Last year’s lovely comic two-hander Prince Avalanche aside, Green spent the last decade straying ever-far from his distinctive, quirky and wonderstruck “regional” early features, his 2000 debut, George Washington, chief among them. The first moments of Joe already contain elements that instantly Green’s pre-Pineapple salad days: a kid, an adult, train tracks, rural penumbra—we’re back in the saddle! But we’re also dealing with a more mature Green. Joe features characteristic digressions and eccentricities: some dude lifting weights in a brothel, another skinning a deer while smoking a cigarette, a frail old hillbilly, played by a homeless man Green met at a bus stop, who gets evil-drunk and can barely get up, but can breakdance, at least with his upper body. None of these kooky interjections get in the way of telling Brown’s grim tale. Joe is most similar to Green’s Undertow—Green calls the film a contemporary western. Unlike George Washington’s overgrown North Carolina idyll, race matters here. There is a scene white man beats black man to death for pocket change and a bottle of rosé. Or maybe just to prove that he can. 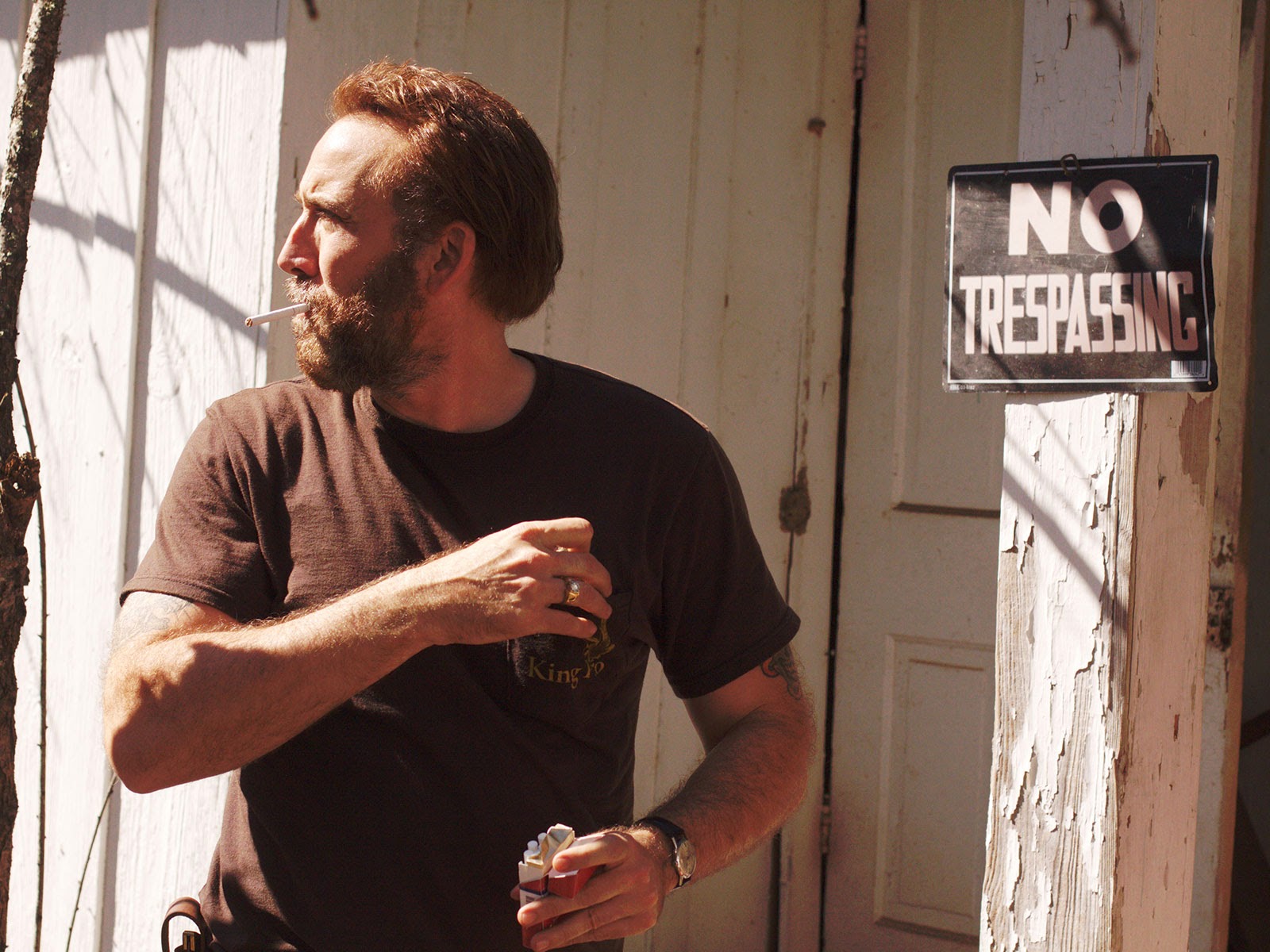 That should give you an idea of the film’s milieu and tone and what it means in the story of its director, but I still need to tell you about what’s most remarkable in Joe. It is indeed a sort of western, with a plot involving an adolescent boy (Mud’s Tye Sheridan) trapped in a perilous home situation and bad men coming out of the past, but true to its title, Joe is also a character study, and its titular character is played by Nicholas Cage, doing some of the finest, most unaffected work of his career. In his Pantera tee, tattoos and big beard, Cage’s fearsomely intense Joe is an embodiment of damage done and held barley in check. He knows it’s restraint that keeps him alive, the capacity to channel rage, or at least nullify it with drugs and alcohol, maybe sex. He has a dog that needs to be kept on a leash, until it isn’t. He runs a small crew that kills trees for a living, poisoning entire forests for lumber companies looking to clear land and plant more profitable pines. (Joe is also, like Prince Avalanche, a film sensitive to working life.) Joe seems like a good boss and tries to do right by Sheridan’s troubled teen. At one point we see Joe nurse his own gunshot wound with duct tape. He’s a genuinely complex character, not just a wild clash of conceits concocted by Cage, who has himself described much of his more recent performances as “western Kabuki.” Joe’s the sort that you will surely feel some empathy for but may not ever want to actually know. In any case he’s the centre of this excellent film, one of the fiercest and most well-crafted American independents of 2014.
Posted by JB at 12:54 PM No comments: Links to this post