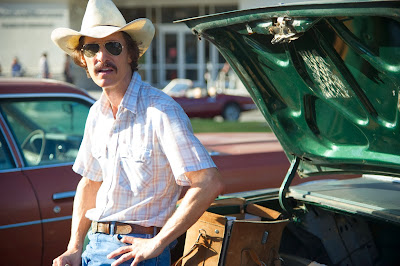 Dallas Buyer’s Club starts with a skeletal moustached Matthew McConaughey, pants down, bucking in the stall with some gungy honeys while just outside cowboys and clowns get trampled in the dirt by furious broncos. This gets at least a B+ for inventive ominousness. McConaughey’s playing one Ron Woodroof, the real-life Texan electrician, amateur rodeo rider and professional party boy who in 1985 learned he had HIV and was given 30 days to live. Determined to beat those odds rather than succumb to despair—“I prefer to die with my boots on,” he says—Woodroof starts gobbling up black market AZT. When he finds that AZT only makes matters worse, he investigates and begins to patronize global experiments in AIDS-fighting medicines, eventually opening his own “buyer’s club” so as to get those non-FDA-approved meds to people who need them and support his own treatment program. 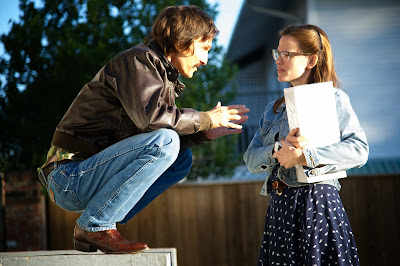 Along the way, Woodroof goes from being a violent, bigoted asshole whose apparently abundant sex appeal is rather mysterious—despite the fact that he’s Matthew McConaughey—to being a paragon of openhearted endurance and pansexual brotherhood. This reformation of the redneck dirtbag is by far the film’s most impressive achievement, with capital-K kudos to McConaughey, though the radical weight loss McConaughey underwent for the role is problematic. This shocking physical transformation is presumably meant to dissolve the actor into the character, but I find it has rather the opposite effect: there are times when you look at McConaughey’s emaciated body and all you can think is, Why is the actor doing this to himself? Jared Leto also stands out—both for his own weight loss and for the strength of his performance—as Woodroof’s business partner, a drug-addled transgendered person who listens to nothing but T-Rex. Leto looks really good as a woman. 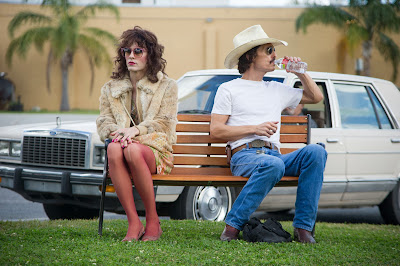 Café de flore director Jean-Marc Vallée seems to have a special interest in tales of wild men coming down after riding high in the saddle. Working from a workmanlike script by Craig Borten and Melisa Wallack, Vallée seems unusually invested in clear storytelling, employing refreshing few of the stylistic flourishes that make some of his films feel like music videos. Dallas Buyer’s Club’s most visually flamboyant moment is actually quite lovely, with Woodroof wandering into a room full of butterflies. The scene could easily have been cut, but I’m glad it remains. The image says so much about this character’s transformation without speaking a single word.

P.S.: If you want to learn more about how big pharma and the U.S. government appallingly failed to respond to the AIDS epidemic, see the documentary How to Survive a Plague.
Posted by JB at 11:25 AM No comments: Links to this post

The face a story, the story behind the face 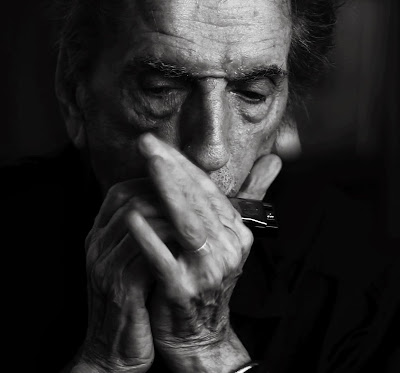 His face, loveably weathered, can be found in so many examples of a very particular kind of American film from the 1970s onward. I’m talking about Harry Dean Stanton, the great character actor who, like a few other great character actors, is a revelation whenever he’s given the opportunity to take a lead. One of those rare opportunities—a film called Paris, Texas, released in 1984—yielded what in my estimation is one of the most luminous performances in cinema history. David Lynch, who has directed him in six films, adores his innocence and praises his craft, but also concedes that Stanton’s face itself is a story. It should be carved into the side of a mountain, alongside those of Warren Oates, Seymour Cassell and Steve Buscemi: a Rushmore of adorably wounded late 20th century American movie maleness. In the meantime we have Stanton’s films—over 200 of them—to watch and re-watch, as well as this lovely little documentary from German filmmaker Sophie Huber. 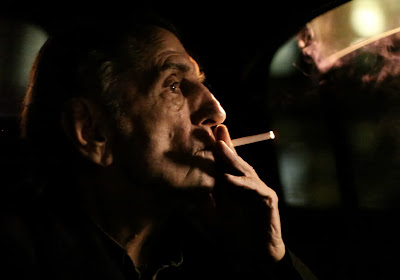 The title of Harry Dean Stanton: Partly Fiction is derived from a beloved Kris Kristofferson song—the one Cybil Shepherd quotes to Robert De Niro in Taxi Driver, a film Stanton could easily have been in, playing one of the older, wiser graveyard hacks. Over the course of Huber’s portrait we begin to surmise that the fictive part is Stanton’s claim of just being himself on-screen, of not doing homework or thinking too much, an attitude that fuses bravado with modesty. It is a fiction to think that the emotional textures and behavioural detail Stanton conveys comes without hard work. Indeed, a quick survey of Stanton’s body of work reveals not only hard work but also considerable diversity, i.e.: the taciturnity of his drifting stranger in Paris, Texas and the volubility of his addled agent of repossession in Repo Man. Late in the film Stanton’s assistant testifies to the absurdity of Stanton doing nothing. “If he did nothing he’d still be in a rocking chair in Kentucky,” he says. So Huber’s film, besides being a gift to anyone who loves Stanton—or Lynch, or Kristofferson, or Sam Shepard, or Debbie Harry, or Wim Wenders, all of whom show up to pay homage—is also a proposition: the magic of this thing we call screen presence may be inherently mysterious, but it isn’t merely stumbled upon; it’s a labour of love which requires to put all of one’s life experience into one’s roles. Without getting too precious about it, the film might teach you a few things about acting. 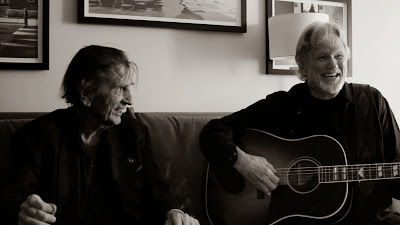 But if you follow Stanton’s work and know anything of his famously inebriated life—he lived with Jack Nicholson for a while in the late 1960s—you’ll also want stories, and Huber supplies a few good ones. Among the most hilarious: Stanton and Bob Dylan spoiling a perfect shot during production on Pat Garrett & Billy the Kid by, I kid you not, jogging into frame! Huber also allows Stanton, now 87, to sing for the camera: ‘Blue Eyes Crying in the Rain,’ ‘Everybody’s Talkin’ at Me,’ ‘Blue Bayou.’ He’s surprisingly good, if wobbly. Charming is the word, not just for the singing but for everything he does, including speak of a life in which lasting love has always been elusive. There is something about Stanton that seems to resist conventional companionship. “I’ve just been a loner all my life,” he says. Partly Fiction falls short of explaining how he wound up this way, but such analysis is far from the point of the film. Like the songs Stanton loves to sing, the film is really a ballad. It’s old man blues: sweet, pretty, sad, personal, and finally enigmatic.
Posted by JB at 11:33 AM No comments: Links to this post

Something in the night 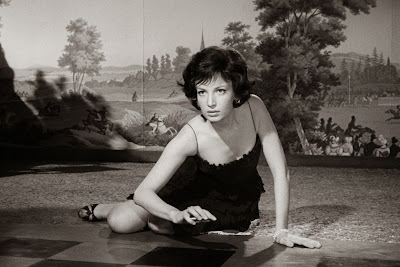 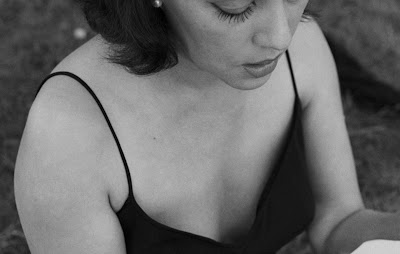 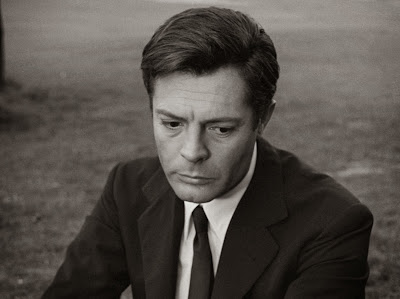 The center of a trilogy that begins with L’Avventura (1960) and ends with L'eclisse (1962), Michelangelo Antonioni’s La Notte (1961) is in some ways the most difficult. While the characters—like the camera—are almost always adrift, roaming Milan and its modern spacious interiors, they appear spiritually moribund—is it an accident that at one point we spy a woman reading The Sleepwalkers? Whatever the dreams or desires that once animated Giovanni Pontano to become a novelist and stake his claim amongst the cultural elite seems to have drained away. He goes to clubs and parties, even chases women, without enthusiasm. His wife Lidia conveys somewhat more of a sense of genuine engagement with the world, though her engagement is almost entirely that of a searcher or observer. Even when surrounded by people seeking to include her in their activities—the second half of the film unfolds at a party thrown by an affluent family—she usually keeps her distance. When, at the beginning of the film, she and Giovanni visit a dying friend in hospital, she cuts short her visit and leaves Giovanni behind, opting instead to wander the city for a long while, losing herself amidst people and buildings and traffic, eventually making her way toward the outskirts, where she finds discarded objects and stumbles upon a fight between two men with many others watching. None of these men holler or speak. No one even says “ow.” It is a sequence of anonymous clamour or eerie silence. Lidia’s protracted city tour may seem emotionally remote, yet it is wildly cinematic. The film’s emotions are expressed by contrast and compositions which not only attend to what’s in the frame but what’s outside the frame yet reflected on surfaces within. Repeatedly using glass as a sort of sculptural material, Antonioni and his cinematographer Gianni Di Venanzo create a series of palimpsests. I said the film was difficult, but by this I simply mean that it doesn’t much lend itself to character identification, that bedrock of so much narrative cinema. Its mastery and richness lie elsewhere. La Notte is a movie made of architecture, noise and time. It is now available as Blu-ray, DVD or download from Criterion. 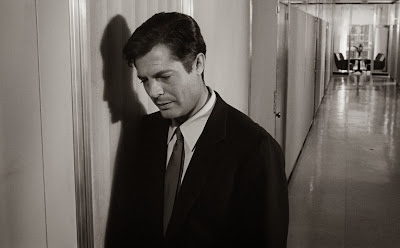 The alienating aspects of the film were much noted at the time of its release. Marcello Mastroianni and Jeanne Moreau were huge international stars at the time. The melancholy Mastroianni we’d seen attending a soirée the year previous in La Dolce Vita (1960) was a party animal next to the morose Mastroianni half-heartedly attempting to seduce Monica Vitti’s delicious kitten at the all-nighter in La Notte. Mastroianni was reportedly unhappy with both the production and the finished result. Indeed, the film doesn’t look like it was a blast to make, at least not for the leads. They pose as much as they perform—though, watching it again, I’m struck by the fathomless depths Moreau conveys by the force of her sheer presence, by a glance, a stride, a way of placing her body alongside a piano or into a sports car. Her movements are hypnotic. Again, the film is far from inert—there is almost too much going on in any one shot to take in. It rewards repeat viewing. And it does have its wonderfully amusing moments. My favourite occurs at dawn, when Vitti’s character, having been the object of Giovanni’s insistent, listless affection and Lidia’s knowing benevolence and fascination, stands by a wall, as if in need of support, and, just as the couple finally leave her, says, “You two really have worn me out tonight.” 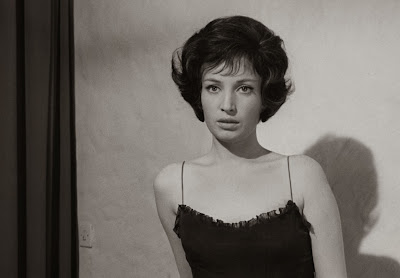 See Criterion’s superb package. Hell, buy it if you can. It contains a visual essay by scholar Giuliana Bruno on the role of architecture in Antonioni that is brilliant, insightful and can only widen one’s appreciation for the film exponentially.

Posted by JB at 4:19 PM No comments: Links to this post