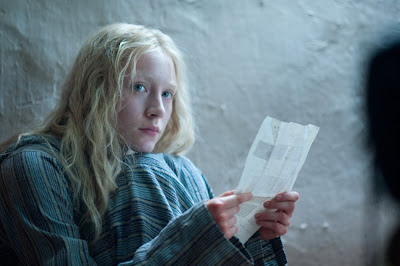 Our titular adolescent home-schooled superathlete (Saoirse Ronan) grows up near the North Pole receiving instruction in hunting and fighting by her survivalist dad with a past (Eric Bana). When she’s finally ready to leave their frozen nest she does so knowing that a certain nefarious CIA operative (Cate Blanchett) will instantly be out to kill dad and maybe do something worse to her: there are intimations that she’s got some sort of top-secret experimental juice in her genes. A genuine wild child whose knowledge of culture has been culled entirely from a slim encyclopedia but whose strength and agility is ninjalike, Hanna’s story slides between her discovering the world and her killing a whole lot of people in it. (Though, if it makes you feel better, she doesn’t seem to enjoy her displays of lethal child-violence nearly as much as Chloë Moretz does in Kick-Ass.) 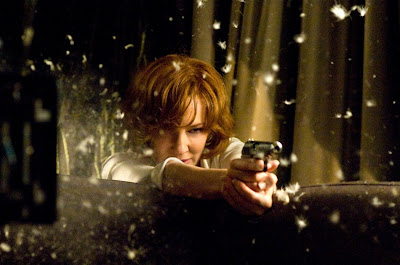 Director Joe Wright reportedly inherited the project from Danny Boyle, to whom Hanna, with its pulsing chase narrative, techno-friendliness and air of childish awe, seems more naturally suited. But then again, Wright, who previously helmed Pride and Prejudice and Atonement, hasn’t really distinguished himself as being naturally suited for anything besides ultra-high production values, which he exploits very professionally (and I don’t use that word casually). Employing jump cuts, flashing lights and the Chemical Brothers, Wright seems eager to shake off the stateliness of his extant work, get the blood pumping, and start acting his age (he’s not yet 40). Some of this is pretty fun and intriguing, but it’s also uneven and confused, its sci-fi aspects are barely even glazed over, and I’m just not sure what to make it as a whole. I appreciate Wright’s willingness to eschew certain globalized thriller conventions (there are no titles announcing our current location being typed over establishing shots) and focus on sensation over story (a good thing since David Farr and Seth Lochhead’s sub-Bourne script is riddled with gaping holes: where did our snowy middle-of-nowhere forest-spawned Hanna learn to use handguns and personal computers anyway?), but if my praise feels miserly it’s just that Wright’s rebooted stylistics feel tacked on much of the time, more schematic than suasive. Bizarrely, Wright claims to be influenced here by David Lynch, while Hanna feels so much more like less trigger-happy (with regards to both guns and editing) Tony Scott. 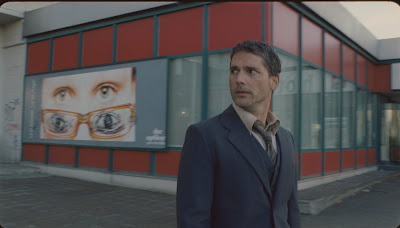 But okay, I think I can spot the Lynch-pin. There are some roaming kooky villains on little Hanna’s trail. The sadistic leader (Tom Hollander, who it must be said really seems to having a great time) wears silly jumpsuits and does a little soft-shoe while interrogating an English family in a yard full of shipping containers, all very theatrical. His underlings are all skinheads, because apparently it’s easy as pie to find neo-Nazis just hanging around in North Africa, right? Does self-consciously quirky, menacing nonsense constitute a “Lynchian” touch? Perhaps if you don’t watch Lynch’s films very carefully. Or at all.
Posted by JB at 2:38 PM

Howdy Pardner!
You were wrote up
In Bunchie’s Blogger Round-Up

It was reassuring to read your review of HANNA and find you were as underwhelmed by it as I was. It's made with taste and professionalism, as you say, but with a premise like this, shouldn't there either be better-developed, more focused themes in the script, or more crazy verve in the filmmaking?

Paul, you've hit it on the head. Just read your review (ha! ECM album covers--a jazz nerd joke!) and you articulated the film's half-measures clearly and thoroughly. I just don't think Wright is investing himself in his material anywhere near as much as he does in his opportunities to try out nifty gimmicks (which at times almost seem random in their niftiness). His aptitude with the mechanics of spectacle is unusually high, but that deftness somehow makes the lack of real personality behind it all that much more apparent.