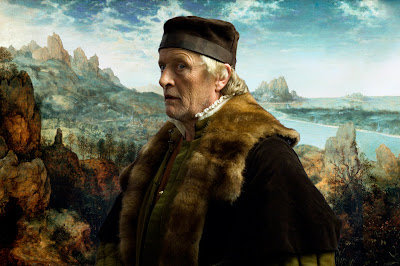 “My painting will have to tell many stories,” says the artist, slightly hunched, eyes watchful as an owl. “It must be large enough to hold everything.” What is that everything? It is woodcutters and weeping women; Spaniards in red tunics on horseback flogging heretics; children, carrion birds and gallows; the shadow play of gears on fat faces; circles of dancers; the echo of wooden shoes on floorboards; the windmill in the Lord’s position, high up on the narrow mountain, and the heavy-bottomed clouds receding into cold blue. There is much, much more. 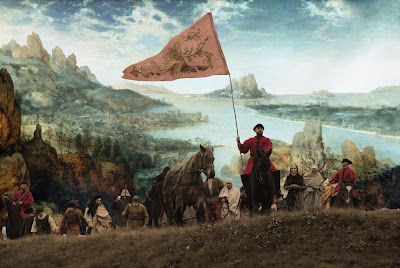 But wait, this everything is a conflation of two different everythings: there’s the painting, Pieter Bruegel the Elder’s The Way to Calvary, completed in 1564, and there’s the movie, Lech Majewski’s The Mill and the Cross, completed in 2011, drawn from Bruegel and from Michael Francis Gibson’s book of the same name. What’s especially remarkable about Majewski’s hybrid of art history, political history and formalist ensemble drama is the way it merges the composed with the naturalistic, the still and painterly with the fluid and cinematic. The Bruegel imbues the movie with monumental vastness and historical sweep; the movie makes you hear sounds and discover action in the painting. This is art conversing with art—and the conversation’s well-met on both sides. 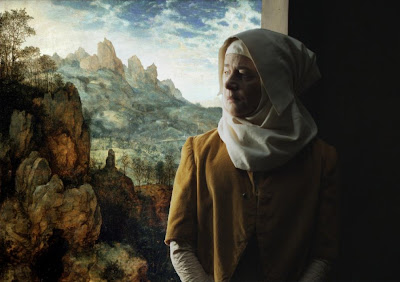 Majewski, who co-wrote the script with Gibson, follows the Bruegel in its insistence on conjuring narrative primarily through the visual. Words are heard mostly as monologue, uttered by some pleasingly familiar voices: Rutger Hauer as Bruegel, Charlotte Rampling as Mary, Michael York as Nicolaes Jonghelinck, a banker and art enthusiast (we glimpse Bruegel’s The Hunters in the Snow on one of his walls; it was actually painted in 1565, but I’ll grant Majewski his poetic license) appalled by the treatment of the people of Flanders at the hands of the Spanish. Their voices enhance the movie’s trance, luring us into its particular moment, where brutality is transformed into beauty by one who aspires to reveal multitudes on a single coherent canvas. Majewski has the distinct advantage of having a canvas that moves and talks and is 91 minutes long, but he uses that advantage rather well. 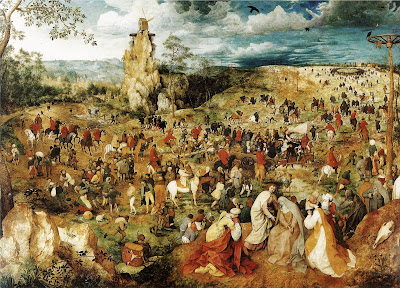 Oh, this has been on my list for ages, but buried under a pile of other must-sees. It's shooting up to the top now. (Actually, anything with Charlotte Rampling usually shoots up, but her appearance here somehow got past me.) Many thanks for the terrific piece and the reminder to watch it.

My pleasure. But just so you know the film's sort of the opposite of a showcase for its actors. Rampling is there less to give a performance than to be a presence... but what a presence!