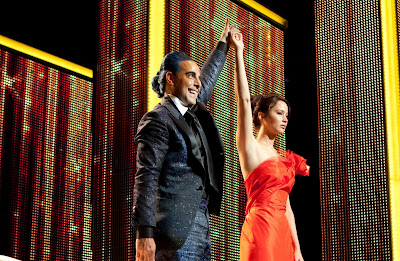 Based on the first installment in the same-named mega-selling young adult science-fiction trilogy by US novelist Suzanne Collins, The Hunger Games imagines a future dystopia where society’s divided into a single, opulent, super-hi-tech Capitol and a dozen rural Districts where the bulk of the population live in destitution and toil to support the affluent, wasteful fascist chucklehead minority. The clownish big city-types dress like they’re trying to get into the next issue of Fruits—Stanley Tucci sports a blue-rinsed Salieri wig and a toothpaste advert Joker smile and Wes Bentley’s face is marred by the all-time most pretentious hipster-wannabe sculpted beard—while the teeming proles take their fashion tips from Little House on the Prairie. 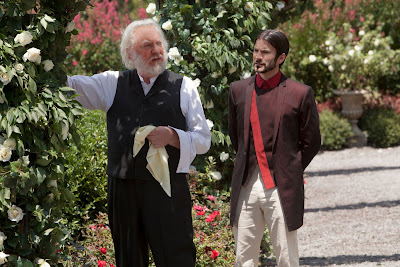 If all that didn’t already seem like a drag, every year two kids are selected from each District, given some rigorous training and thrown into a vast, elaborately booby-trapped wilderness gladiatorial arena where they do battle with the elements—forest fires, hallucinogenic genetically engineered wasps, poisoned berries and bloodthirsty overgrown bulldog-like beasts that at the push of a button materialize out of nothing at all (so much for internal rules or even a modicum of verisimilitude)—and, of course, with each other. The event, now in its 74th year, is broadcast and apparently maintains a rabid fan-base. I guess reality television really is here to stay. 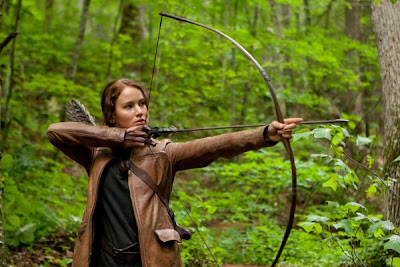 A contestant’s success in the Hunger Games is as dependent on showmanship as on survivalist or combat skills. It’s not altogether unlike becoming a movie star. And the star of The Hunger Games is that young, talented, apple-cheeked beauty named Jennifer Lawrence, whom you’ll hopefully recognize from Winter’s Bone. To some extent Katniss Everdeen is something of a reprise of Lawrence’s Oscar-nominated lead performance in Winter’s Bone: she again plays the eldest daughter of an absent dad and might-as-well-be-absent mom; she’s tough, woods-wise, protective of her little sister, a practiced hunter with nothing against squirrel meat. But then Katniss becomes a hopeful in the Games and gets Lenny Kravitz as her personal stylist. Katniss is a strong archer and more mature than most of her fellow contestants, but her big handicap is that she doesn’t want to hurt others, most especially Peeta Mellark (Josh Hutcherson, aka Laser from The Kids Are All Right; guy's having some kind of luck with goofy character names), the other kid from her District who also happens to have a huge crush on her. You can see where this is going. 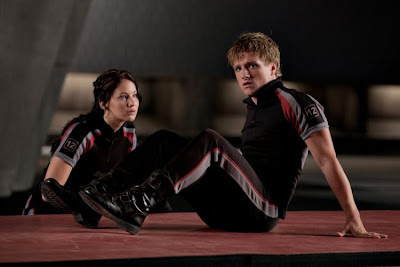 Helmed by Seabiscuit director Gary Ross, the film is perplexingly belabored, with a long-long-long first half that lingers over the pre-Games activities without really providing much milieu detail or developing the characters. The draggy pacing feels obligatory, dictated by the ostensible momentousness of the occasion, by which I mean to say that The Hunger Games is such a hugely popular book that the movie version simply has to be Oscar-length, ie: well over two hours long. While the hungry hardcore fans might savour every extra minute of running time, for the rest of us it’s really a shame that The Hunger Games couldn’t have aspired to a fleet, efficient, say, 92 minutes. If it had, I think it would have gotten much closer to becoming the bracing thriller it wants to be.
Posted by JB at 1:07 PM

So glad to hear that you loved this movie too, JB. Did you sit next to the posse of teen girls all squealing and cramming more sugar into their mouths? That's enough to make virtually anyone eager to see the hunger games extended to more than just 24 teens per year.

I'll have to be satisfied that 1) we agree on most other things, and 2) that if you'd gotten sucked into the books and the larger metaphorical readings that inevitably emerge, well, maybe you might've had something nice to say about Jennifer Lawrence, at least!

I do love reading you be cranky. Do that more, would you?

I will certainly see what I can do about more cranky. Maybe post a review of Mirror Mirror? (Maybe not.)

In the meantime, let me assure you that I thought Jennifer Lawrence was terrific in the picture. Which is a good thing since I guess she'll be playing this character in (at least) two more pictures. But she's so young and so good that regardless of my feelings about this franchise I just really hope to see her in a more diverse array of work.