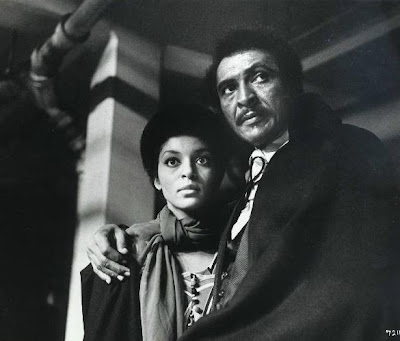 It’s probably most useful to think of Blaxploitation not so much as a genre unto itself but rather as a prism through which the filmmakers can repurpose existing genres. Case in point: Blacula (1972), American International Pictures’ low-budget, shamelessly pandering, Afro-centric spin on Bram Stoker’s classic horror novel and its countless cinematic incarnations. Opening with a scene, set in 1780, in which Prince Mamuwalde (William Marshall), ruler of an unidentified African country, pays a visit to Count Dracula’s Transylvanian castle in search of an ally in his campaign to end the slave trade. Dracula’s hardly inclined to start caring about slaves—after all, the guy routinely feeds on the blood of others and turns them into undead creatures who do his bidding—and opts instead to appropriate Mamuwalde’s extremely attractive wife, Luva (Vonetta McGee), turn the prince into a vampire and imprison him in a coffin. Mamuwalde’s torment subsides only 192 years later, when an interracial (!) gay couple travels from “the Village” to Romania to shop for high-end antiques. They bring the coffin back to the US and soon enough Mamuwalde wakes up, busts out and starts sucking blood. Seemingly nonplussed by the vestiges of two centuries worth of civilization and technological advancement, Mamuwalde wanders some version of Los Angeles, I think it’s meant to be, and eventually meets Tina (also McGee), whom he believes to be the reincarnation of Luva. Mamuwalde seduces Tina, but the interracial crime fighting duo of Dr. Gordon Thomas (Thalmus Rasulala) and Lt. Jack Peters (Ladies and gentlemen, Officer of the Order of Canada, Gordon Pinset) are getting wise to the prince’s neck-chomping ways and threaten to thwart Mamuwalde’s union with his soul mate all over again. 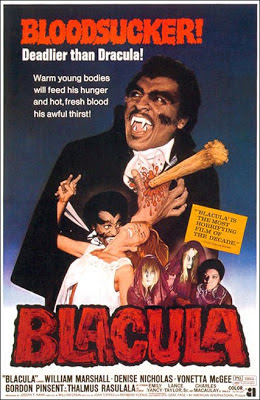 According to the film’s production history, the whole slavery-infused prologue was an afterthought, prompted by Marshall’s demands that his character seem more dignified. Indeed, little else in Blacula seems to possess much in way of overt or in any case coherent political commentary, even on the level of what might be deemed sheer Black Power propaganda. And the film certainly doesn’t shy away from using its crudely stereotyped gay characters for cheap laughs; Pinsent’s best/worst line, upon learning of the disappearance of the corpse of Mamuwalde’s first victim: “Who the hell would want a dead faggot?” Being an AIP exploitation film, the production values are, ahem, not high. There are continuity errors so flagrant as to seem avant-garde, and the entire film is bizarrely over-lit considering the fact that it’s central character is, you know, a vampire. 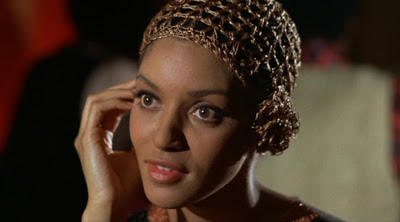 But there are reasons to see Blacula beyond the ironic chuckles or time-capsule value: a terrific opening title sequence; a pleasingly counterintuitive (given the genre) R&B score from Gene Page; an amusing, goofily cocksure supporting character named Skillet (Jitu Cumbuka) who swaggers into a couple of scenes with no apparent purpose other than to make Mamuwalde exit; a surprisingly solid band that plays at the nightclub where Mamuwalde hangs with his new pals; and, most especially, the outfits. Seriously. Pretty much everything McGee wears is a knockout, especially Luva’s African royalty garb or this sexy little getup Tina tops off with this kind of a cappuccino knit skullcap. Not everyone in Blacula seems as thoughtfully dressed, but clearly McGee wasn’t about to be caught dead—or undead—in anything less than a memorable, well-tailored fashion statement.
Posted by JB at 3:25 PM