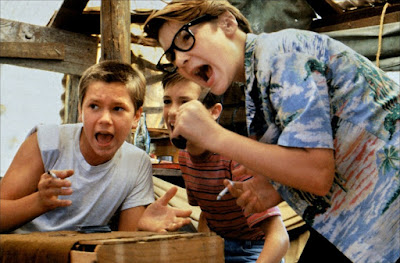 When I saw Stand By Me (1986) I was exactly the same age as the kids in it. I was 12-years-old and, watching Stand By Me, I experienced a midlife crisis—the movie made me feel like my life, the good life, was already passing me by. Which is what the movie is designed to do. I completely identified with Richard Dreyfuss’ narrator, who, if I think about it, is about the age I am now. He’s the grown-up version of Gordie (Wil Wheaton). I identified with Dreyfuss when I was 12, but I don’t much now that I’m actually his age. I don’t relate to the ridiculous assertion that, at 12, he and his friends “knew who we were and exactly where we were going.” And I don’t relate to his closing sentiment that he never had friends like the friends he had when he was 12. Stand By Me, at least to me, is a film about an adult man who misses the kinship he felt with other kids when he was 12, but the adult man only makes sense to you when you’re 12, which is very likely a time in your life when you don’t feel such a strong kinship with other kids. It’s a 12-year-old’s idea of being a nostalgic adult. Is there a word for nostalgia you feel for something you never experienced? 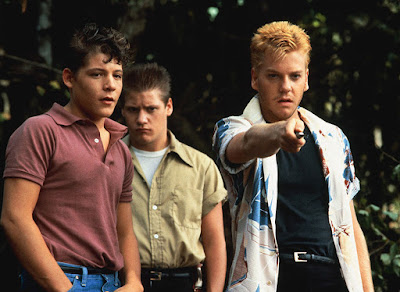 The film was perfectly well directed by Rob Reiner, who apparently could only get enough money to pay for about 20 seconds of any period song. If you don’t know the story, it follows Gordie and his buddies—crazy Teddy (Corey Feldman), gullible Vern (Jerry O’Connell), and the wounded, brave and beautiful Chris (River Phoenix, whose hair in the sunshine looks like spun gold)—as they go on an overnight excursion in search of the dead body of a missing local boy. It’s small-town Oregon, Labour Day weekend, 1959. Also looking for this dead body are a bunch of older idiots led by Kiefer Sutherland, who has a terrible dye job and sculpted stubble. The confrontation with the Sutherland gang near the movie’s end is pretty dumb. There is a scene in which Chris talks about his family to Gordie and cries, and a scene in which Gordie talks to Chris about his family and cries, and those scenes aren’t exactly silly but simply too on-the-nose and, more to the point, poorly written. The adults are all cartoons. There is a superfluous dream sequence that feels like pure filler—the source material is a Stephen King novella and I guess they felt they needed to pad it out to make it a feature—and a barf fantasy that is, frankly, awesome. But the scenes of the boys just hanging out, doing stupid kid stuff, are gold. Walking down train tracks, spitting into a tin can, sitting around a fire, insulting each others’ mothers—it’s precisely in the scenes not working hard to feel poignant that feel most poignant. It’s lines like “Pile of shit has a thousand eyes.” It’s seeing 12-year-old boys with their arms around each other because why not throw your arms around each other? 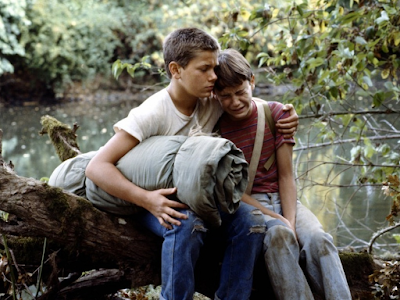 I didn’t see a dead body when I was a kid. (That came later.) I didn’t fend off bullies with bad stubble with a .45. (That, thankfully, still hasn’t happened.) When I first saw Stand By Me I mourned the lack of such experiences in my life, which was already hurtling mercilessly forward. But what matters more to me now is that I never had friends like the boys in Stand By Me. Or I had friends, but never felt so easily part of a group of friends, that sense of acceptance and camaraderie. Did you?
Posted by JB at 11:13 AM