"Just one dude and a guitar in front of people": Oscar Isaac on getting Inside Llewyn Davis 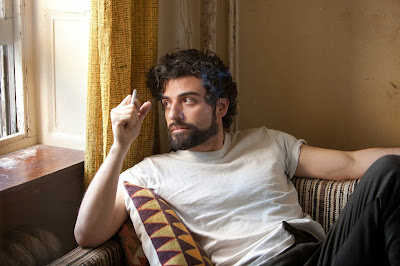 Oscar Isaac was born in Guatemala and raised in Florida. Aside from his acting career, he’s also played music since he was a kid, slipping from one genre to another, driven by innate curiosity. He’s already amassed numerous credits but his role as the eponymous struggling folk singer in Inside Llewyn Davis marks a major breakthrough, both in terms of creative challenges and visibility. Isaac’s had a busy year promoting the film since its Cannes premiere, but he managed to spare some time to answer a few questions over the phone last week. 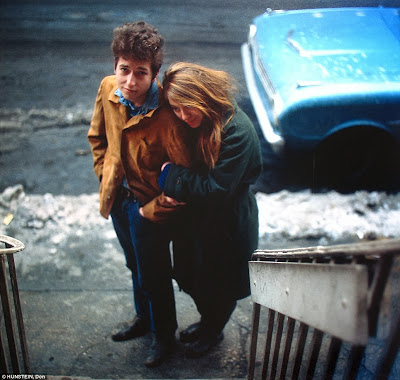 JB: Did the folk revival of the early ’60s hold any special meaning for you?

OI: I grew up listening to Dylan, but I wasn’t terribly aware of the pre-Dylan folk scene. The repertoire was unknown to me, but since getting involved in this project I’ve become hugely affected by it. 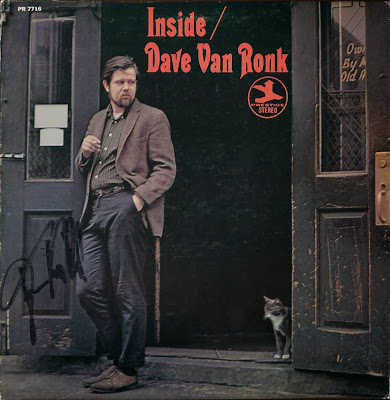 JB: Dave Van Ronk was a key inspiration for Inside Llewyn Davis, but I don’t know whether his life or music was something you turned to when preparing.

OI: When you’re starting out you grab on to anything that might help, so I did spend a lot of time with his legacy. I found everything he recorded and really latched onto his style of playing. 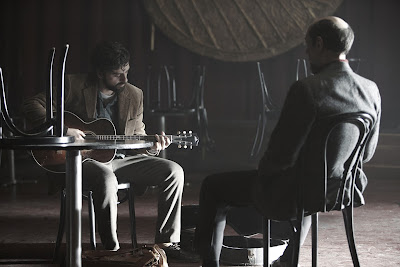 JB: Something I find fascinating about the film is the dissonance between Llewyn Davis the bewitching performer and Llewyn Davis the guy just trying to find a decent winter coat. Did you sense that dissonance while singing those songs? Did it require you to go to a different place than the one you inhabit in the rest of the film?

OI: Yeah. It’s incredibly intimate. Just one dude and a guitar in front of people, playing these songs. He’s generally disconnected, an island unto himself, so when he plays these songs they become windows into his soul. It was very important that these musical performances were not expressive so much as revealing. The key to doing that was to play as though I was just playing for myself, like I was just sitting on my couch, alone. Don’t put anything on them. Don’t try to squeeze anything out.

JB: We really come to know Llewyn in some substantial way, yet the character so often avoids sharing anything, even when confronted with what we gradually learn was a recent and devastating loss. The only scene where she speaks at all openly about this loss is during the road trip to Chicago, when talking to someone he couldn't care less about.

OI: When you’re going through hardship you do everything to avoid it. He’s no different. If you think of this as a story of grief you can kind of track the stages. You hear him play this record from his past in solitude, then he plays the same song at the midpoint and it makes him angry, then he plays it again at the end as a dirge. There’s a process in there of letting go.

JB: There’s also something about a guy channelling grief through songs that aren’t his. They can engage his emotions without being his own words, without sounding like overt confessions.

OI: The preservationist in him looks to the past for songs that seem relevant in the now. They speak to his personal experience but also to something bigger, something in the air. 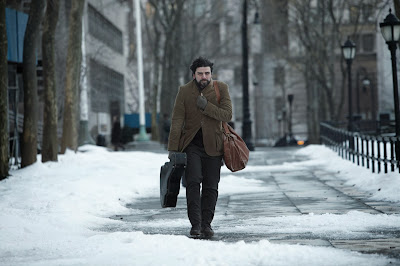 JB: A continual source of dark humour in the film is Llewyn’s inability to move his career forward. You’ve obviously had more luck in that department, but I wonder if you can relate to his frustrations.

OI: Definitely. I constantly ask myself why I’m doing what I’m doing. The reason is usually to get back to initial impulse that made me want to do it in the first place, that search for creative joy. But you get old and further along and that search slaps up against the ordinary bullshit of existence. That’s when you can lose your way.  There’s also the frustration of having something to express but not having the platform to express it through. No one’s willing to listen. It takes perseverance. But, if you consider everything that happens to him, that’s one thing that Llewyn is arguably not lacking.
Posted by JB at 1:28 PM