Death of a Cyclist: screening the delicate balance between pure polemic and pure pleasure 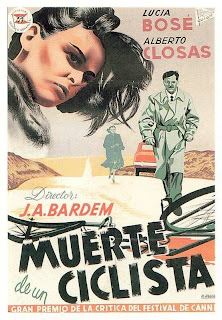 It opens on a stretch of country road so gray, stark and forsaken as to feel pulled from a dream—even the two or three trees look cold and lonely. The image of this landscape stays fixed as the cyclist passes us by, exiting the frame not long before the car enters it, the collision between the two happening off-screen in the eerie, phantasmagoric interim. The car stops and the couple within exits to survey the damage. The man, Juan (Alberto Closas), surmises that he cyclist is dying—all we can see in the framing is the still-spinning wheel. The woman, Maria (Lucia Bosé), urges the man to leave. They drive away, abandoning the cyclist, and the titular event of Spanish filmmaker Juan Antonio Bardem’s Death of a Cyclist (1955), newly released by the Criterion Collection, has transpired with bracing efficiency.

Accompanied by a score of Herrmannesque portent, a tone of an unmistakably noir melodrama has been set. Yet right there within this brooding atmosphere lies the first of numerous overt, pointed allusions to a troubling class disparity: a humble-looking man on a bike is knocked down by a well-dressed couple in a sleek automobile; the couple, we learn immediately after, are having an affair, and are more concerned with maintaining their secrecy—and with it their comfortable bourgeois existence—than with the welfare of the victim of their negligence.

With each subsequent scene come further layers of social critique: the insularity and nepotism that allows Juan to hold an enviable position at a university; the appearance of a nefarious art critic, a self-described “good for nothing” who lurks in elevated social circles sniffing out opportunities for blackmail with an ingratiating smile (there is the sense that the art critic’s vocation is itself deemed a product of bourgeois decadence); the fact that Juan looks conspicuously similar to Miguel, Maria’s wealthy husband, implying that her extramarital activities are so automated that she doesn’t even require a lover that embodies a genuine variation of her husband. The accumulative effect, made complete by the sudden development of Juan’s class-consciousness, spurred by guilt over the accident, is a depiction of a Spain well-settled into Franco’s triumph, sinking into its own turgid morass of Fascist reactionism.

If Death of Cyclist reads as schematic, that’s because it is, and the supplementary texts in Criterion’s package, including one from Bardem himself, emphasize the director’s schema all the more. Bardem had publicly declared the Spanish cinema as “politically ineffective, socially false, intellectually worthless, aesthetically nonexistent, industrially crippled,” and Marsha Kinder’s essay ‘Creating a Modern Spanish Cinema’ shows in great detail how Death of a Cyclist was designed as the antidote, a work that would subversively exploit the trappings of Hollywood thrillers as a way to synthesize and heighten Bardem’s polemical call to arms, its true stylistic genre being that of neorealism.

The problem with this sort of reading is that is renders the movie as an airless manifesto in which the artist only reluctantly lowers himself to entertaining us. It also does a great discredit to Hollywood—American film noir, for all its compromises, was already a great source of social criticism, frequently pulling back the curtain of American prosperity to reveal the corruption at the heart of the capitalist impulse, and the typical noir already possessed many of the same innovations as neorealism, such as its use of location shooting. Death of a Cyclist arrived right at the climax of the original noir cycle, the same year of Robert Aldrich’s Kiss Me Deadly, and Maria, its femme fatale, even attempts to secure her social standing using the same shocking method as Margo in the superb poverty row noir Decoy (46).

Regardless of Bardem’s personal aspirations, focusing all one’s attention on its political promptings can make Death of a Cyclist feel somewhat academic, while the best compliment one can give it is to in fact call it a very elegant, highly effective, often fascinating noir. The film moves superbly, the brisk pacing enhanced by the consistent use of shock cuts, those transitions where one image weirdly matches another in an entirely different scene, as though the storytelling itself infuses disparate events with some creepy synchronicity; exposition is handled with tremendous economy; and there’s a bizarre, fascinating morbidity to the way the accident influences the love affair, which reaches its natural erotic climax in a spray of blood and mechanical impact, acting as a subtle precursor to the bizarre equations of David Cronenberg’s Crash (96).

Death of a Cyclist in the end did not signal much of a revolution in Spanish cinema—not even Luis Buñuel’s return to Spain to make the deliriously perverse Viridiana (60) could manage that. Sweeping changes wouldn’t arrive until the 70s while Franco was either in decline, dying or dead. But Bardem’s film can be admired greatly for the way it gives us a portrait of his country in a period of deep repression and stagnancy, and delivering this portrait in the shape of a thriller sculpted from desire, coincidence, small dreams and the never quite squashed undercurrent of social unrest.