Taxi to the dumb side 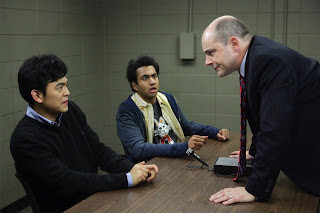 Harold and Kumar let it all hang out. (Especially Kumar.) Theirs is a proud cinema of no shame, where people can feel free to kick back, light a blunt, speak their mind, be themselves. Before we reach the end of the opening credits of Harold and Kumar Escape From Guantanamo Bay Kumar’s already enjoyed a bout of explosive diarrhea and splooged all over his own face. This guy clearly has nothing to hide, and thus earns our trust from the get-go.


So what’s with Homeland Security getting so uppity about Kumar trying to light up in an airplane toilet? These post-9/11 homeboys need to chill. Unfortunately the outfit who nailed our boys on their flight from Jersey to Amsterdam are fronted by a drooling moron racist pitbull who gets his buzz on from wiping his dirty bunghole with the Fifth Amendment—and boy, is that bunghole dirty! But perhaps he can be forgiven for his neglectful hygiene, as he’s in such a tizzy over breaking what’s looking to be the first case of an Al Qaeda-North Korea super-collaboration to murder hysterical American tourists.

One look at Harold’s funny-shaped eyes and Kumar’s chestnut flesh was all it took to send these hapless heroes to Guantanamo Bay, where their worst homophobic fears are embodied in the monstrous white guards who waste no time in getting the newbies down on their knees for their first taste of their new diet of cockmeat sandwich. Fortunately fate intervenes in the form of real-live insane terrorists who like to bite. As promised, Harold and Kumar escape, hitch a ride with some decorative Cubans to Miami, drop in on a party full of pants-free zombies and begin their real adventure through the American South, where they try to enlist the aid of some asshole who’s marrying Kumar’s high school sweetheart yet also has a most helpful direct line to President Bush.

The big theme of Harold and Kumar Escape From Guantanamo Bay is that you can’t always judge a book by its cover. It’s a solid theme, conducive to much excitement and endless reversals. Not long after being mistaken for potential terrorists on account of their race, Harold and Kumar later find that they too are guilty of lazy prejudice. They presume that some ruddy-faced Alabama deer killer is an inbred redneck loony. Well, okay so he actually is an inbred redneck loony—but at least he feeds them and smokes them up… In any case, all in not always what it appears, right? Especially when it comes to the movie itself. Harold and Kumar Escape From Guantanamo Bay may look like a wild comedy with some political teeth to it, but—a ha!—turns out it’s really just dumb. Real dumb. Okay, with a few inspired little surprises that help wash down the pervading dearth of anything actually funny or clever happening.

The ostensibly lovable John Cho and Kal Penn, stars of the 2004 prequel, return from their journey to White Castle for this second go-round of juvenile sex jokes, garish sentimentality and faux stereotype-smashing. They’re joined by a pair of impossibly insipid white girls to pang for and a bizarre guest appearance from the rather stiff but admirably committed Neil Patrick “Doogie” Harris, here playing himself and willfully undertaking one of the most impressive feats of auto-character assassination on record, gobbling psychedelics and branding a prostitute’s ass. Harold and Kumar also have a run-in with the KKK and even George W. himself, who provides the movie’s highlight. (I mentioned the surprises: turns out both Bush and the Klan love metal. Who knew?)