All this useless beauty?: Ashes of Time Redux 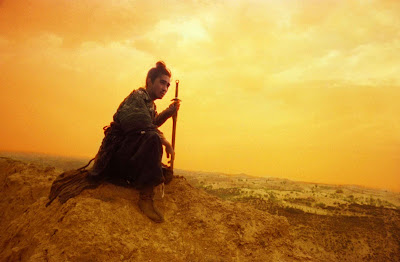 Coming to Ashes of Time only in its re-tinkered incarnation poses a challenge to those of us seeing the film in light of Wong Kar-wai’s so frequently sublime subsequent body of work. A martial arts tone-poem shot by the incomparable Christopher Doyle, featuring a heady array of Hong Kong cinematic royalty armed and in flowing robes, it was originally released in 1994, yet existed for most Wong fans as an elusive enigma, a merging of idiosyncratic auteurism and genre dynamics that promised to be dynamite, and maybe an unfulfilled box office breakthrough. But I’ve seen the new Ashes of Time Redux twice now, and I’m still not so sure what to make of it. Once we establish that any Wong film is far more exciting than most films, I think this particular film has a lot of trouble bearing up critical scrutiny. 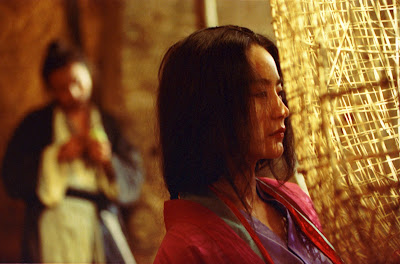 The melancholia induced by obsession with the past permeates much of the densely woven emotional and intellectual textures of Wong’s work, perhaps most stunningly in his 2001 masterpiece In the Mood For Love. Yet memory’s stratagems can be rendered as thin a trope as anything else. The allure of oblivion in Ashes of Time Redux is announced outright in the voiceover upon which the film seems vastly over-dependent. It never assumes the weight or nuance radiating in Wong’s other explorations of the theme. I adore the sheer notion of the old friend (Tony Leung Ka-fai) who visits the lonesome swordsman-for-hire (Leslie Cheung), carrying a bottle of magical wine that makes your past dissolve. But, even after 90 minutes of flashbacks within flashbacks and various encounters in deserts and swamps, landscapes linked only by the peculiarly toned, super-saturated colour palate, I’m not sure that we wind up with anything more than notion itself. 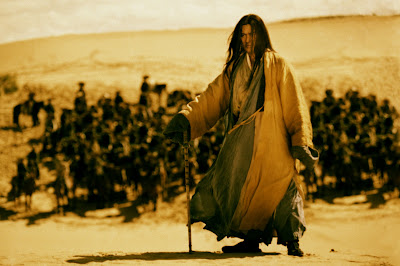 If I seem to be avoiding story, it must be said that Ashes of Time Redux, despite the Lois Cha source novel, is decidedly unconcerned with narrative cohesion. There are characters, and there are moods. I don’t know that either shift much. There are propositions, most memorably one made by two siblings who apparently share the same body, one of whom tries to hire someone to kill the other. There’s some fighting, and Wong’s camera placement here is especially inspired, framing only sections of a teeming battle scene so that steel slashes or combatants hurl across the screen only to vanish. The poeticized action, lacking in any vivid violence, is something to see, if not feel. Its imagery is more durable than those of another character slashing a mirror-like lake—she can’t find a worthy sparring partner, so she practices against her own reflection—which gradually succumbs to aesthetic cliché through overuse. Though it’s not nearly as corny as Frankie Chan and Roel Garcia’s boilerplate score, the closest the film ever comes to bending to genre by far.

So there are many issues, of taste, of inertia, of reliance on gloss, both figurative and literal, of using immutability as a cover for lack of substance. And there are many arguments to made for the film’s purity, spectacle and meditative rigor. But let me say this, especially for anyone who makes Ashes of Time Redux their first Wong experience: It may be enough to be dazzled by the fluttering light and unearthly colours and Maggie Cheung’s cameo, but don’t buy for a minute that Wong can’t deliver all this and much more.

Wow, now I'm starting to feel like a real pushover. I really loved ASHES OF TIME (although my love of it is decidedly unintellectual and far from rigourous) and I found a lot of like in REVOLUTIONARY ROAD too, although I certainly understand your distaste for Sam Mendes' directorial style, which manages to be both overthought visually yet underthought thematically. What can I say? Those unhappy Cheeveresque couples are my kind of people.

I should probably have made clear in my review of REVOLUTIONARY ROAD that I haven't read Yates' novel. Other reviews of the film, including ones with a similar take to mine, juxtapose the source material from the movie in intriguing ways. In any case, I haven't read Yates, and I haven't read Cheever either. Yet I'm going to guess that Cheeveresque couples are probably my kind of people, too. The sort of frustration being address in RR resonates with me deeply, and if it wasn't clear in my review, let me say that the movie for all my reservations affected me intensely. Actually it depressed the hell out of me for some time afterwards.

But perhaps the fact that I feel I do relate to this kind of story is precisely why I felt so irritated by how this particular story was told. It just felt so lifeless to me, so studied, as though the real turmoil was never tapped but pantomimed, save in certain scenes, which for me wound up being Winslet's scenes, at least until the return of the rubber hose, when the directorial style seemed absurdly out of touch to a point where not even the director's tremendously talented wife can save the movie.

Let me say too that I adored Zoe Kazan, the way she breathed through her nose to keep from feeling totally smashed. But then Kazan's performance choices her seem to be about actively resisting something--drunken buffoonery--rather than a lot of what DiCaprio does here, which felt closer to trying to play a generalized emotion more than anything else. And you know how much I admire DiCaprio in other movies.

Oddly enough, ASHES OF TIME was a similar experience for me in that it's so very much my kind of thing--and Wong Kar-wai is easily one of my favourite filmmakers of all time. Yet where his other movies got me involved in their emotional discoveries and arcs--I guess that's a better term than story--this one left me kind of cold. I did warm up to it a bit more the second time, basically because I was able to make a little more sense of it all. But come on, don't tell me you liked the music?

Anyway, I'm glad to see these movies are liked by sharp critics like yourself. They deserve attention and debate--like we're having right now. But in both cases, it looks like I'm forced to play devil's advocate.

One of the things I find fascinating about reading reviews of REVOLUTIONARY ROAD is that there doesn't seem to be a consensus on what Yates' attitude toward Frank and April really is -- for a lot of critics, Mendes' film is a huge betrayal of Yates' themes, but they seem to disagree on precisely why. And others find Mendes' coldness, even in that final sequence with Winslet and the rubber hose, precisely the correct approach to the material. (This is the view expressed by, I think, Jeanette Catsoulis in this year's all-female Slate Movie Club.)

This may just be me projecting, but I can't think of another recent film that has gotten under critics' collective skins the way RR has -- I get the feeling that it's a film that genuinely makes viewers question their own lives and the extent to which they're living up to their exalted views of themselves and their own "integrity." Especially if you're a writer, it's hard to watch RR and not wonder how much you have in common with Frank Wheeler -- and I wonder if some reviewers (not you, though!), in rejecting the Frank aspect of themselves, have decided to reject the movie as well.

It's not as well-executed a film as might have been hoped for, and I think there are perfectly legitimate aesthetic grounds upon which to criticize it, but I think RR is a tough little movie in its way.

I wonder if there's also something about RR being set in the 50s that makes it feel somehow too easy a target for Mendes' seeming superiority. The cliches about postwar consumerism and conformity are no doubt based in a great deal of truth, yet I wonder if a similar story set in the present mightn't have forced someone like Mendes to approach it with greater compassion and a sense of immediacy. I have huge problems with Mendes' approach to AMERICAN BEAUTY, too, which does bring that feeling of failure into a contemporary context, but unlike RR it has some terrific mischief to it, and some traces of Lester and Carolyn having once been happy--something I can't recall seeing in RR. If Frank really did have some hint of greatness in him I only really believe that because April says so.

On that note, I'm curious what you thought of the performances, if they contributed to what you liked about the movie or not. I adore Winslet, but I kind of had the same reaction to her performance here that I did to the one she gave in LITTLE CHILDREN. In both cases her nuances seemed sabotaged by the mise en scene.

By the way, I just picked up the print edition of Vue Weekly, and now that I've seen your star ratings, it turns out that we might not be so far apart on our opinions of these movies after all: you gave REVOLUTIONARY ROAD three stars and I gave it three and a half; you gave ASHES OF TIME REDUX four stars, and I gave it four and a half.

But at least those half-stars of difference produced a real flurry of discussion!

Indeed. You know how much I loathe giving stars, but I suppose I can concede that there are times when the contrast between stars and the actual articulated opinion and analysis can provide a certain context for criticisms.