Interview with the vampire: Frost/Nixon 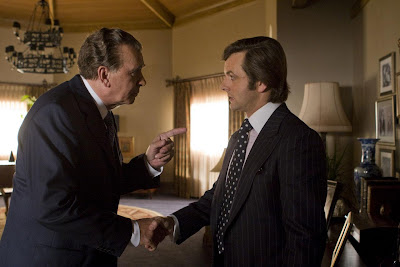 Success in America is unlike success anywhere else, says David Frost. Failure, one assumes, achieves an equally singular stature. And so the terms are set for Frost/Nixon, Ron Howard’s movie of Peter Morgan’s play, which was indeed successful in America, and was inspired by something that took place there in 1977, when English talk show host Frost sat with former President Richard Nixon for nearly 30 hours of interviews that made broadcast history. Both sought to redeem failures, or slumps, in their careers. The event wasn’t exactly a revelation, but it did find an underdog unsettling a formidable orator sufficiently to yield something like an apology for abuses of power. The movie then is timely, coming precisely when millions crave to see another US President confess to not dissimilar sins. 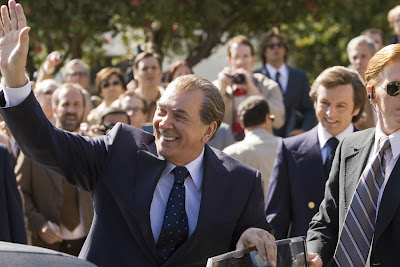 For all his monstrous associations, Nixon is often flattered by Hollywood, and Frank Langella, with his handsomeness, sonorous voice and effortless charisma, is a delight to watch even if he misses those traces of sheer weirdness that perhaps no actor need do justice to since we have the real Nixon so heavily documented for posterity. I adore Langella, but I don’t think he quite escapes the confines of impersonation. His facial mask is impressive, but it tethers him to too limited an array of expressions. Michael Sheen, playing an easy-to-dismiss puff-meister has to work harder and thus gets us more involved as Frost, the film’s actual protagonist, and one rather aligned in his obstacles with Sheen’s Tony Blair in The Queen, also written by Morgan. It’s a part that probably won’t get the same accolades but which the story absolutely hinges on, especially when the movie’s authors manage the material in less than inspired ways.
Morgan’s written his own adaptation, and while you can’t blame the guy for wanting to “open up” the play, it’s hard not to notice that the immediacy and tension of the theatre is sorely missed. The action keeps getting diluted, and the supporting roles are at times left too exposed to scrutiny, like Rebecca Hall’s Caroline Cushing, who hangs around a lot but is the epitome of arm decoration for the male lead, a way of ensuring that we know he’s not gay. 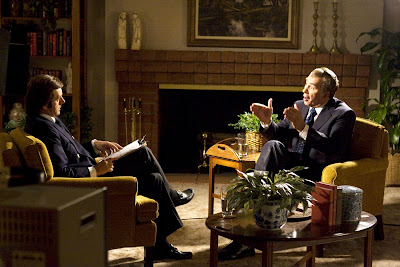 Howard for his part does nothing to spoil the entertainment value of Frost/Nixon—he’s far too safe a director for that—but he doesn’t stir it up much either, despite a Hans Zimmer score that at times sounds better suited to a spy thriller or submarine movie. There’s a compelling statement near the end where investigative journalist James Reston, played by Sam Rockwell, talks about “the reductive power of the close-up.” Howard, in his typically workmanlike but dazzlingly unreflexive way, directs Frost/Nixon as though he hadn’t read this page in the script, offering us, well, a whole lot of close-ups. And boy, are they ever reductive. It doesn’t seem like Howard considered how a movie version might offer something vital that the play—not to mention the actual televised event, with its ample number of close-ups—could not. But he’s dutifully revived a genuinely interesting media landmark and let it play as a fun drama, and that’s reason enough to check it out.