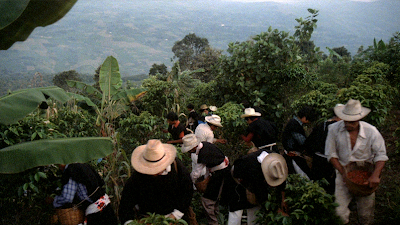 Near the beginning of El Norte (1983), a rural Guatemalan family sits around a table over which Josefina (Stella Quan) extols her practiced impressions of American life. “Even the poorest people have toilets,” she explains. “You flush it, and everything disappears.” As Guatemala is consumed by civil war, this vision of a utopia, a modern, ordered world where no one ever need look at their own shit, a world evoked most beguilingly in the images of vast antiseptic kitchens pictured in a well-thumbed Latin American edition of Good Housekeeping, plants within Josefina’s godchildren Rosa (Zaide Silvia Gutiérrez) and Enrique (David Villapando) the seed of a promised land, a place so longed for it blinds its pilgrims to the enormity of its shadow side. 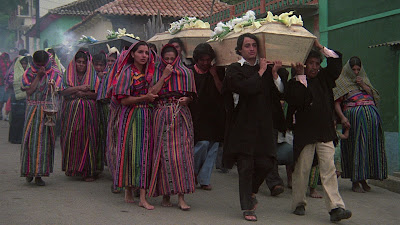 These early scenes establish the peculiar tone of this extraordinary movie, which so flamboyantly rejected the then-dominant docudrama formula. Bookended with stark images of work, punctuated with moments that more closely resemble a horror movie, told entirely from the perspective of Rosa and Enrique, with no buffering middle-class outsider protagonist, El Norte is an epic chronicle of migration conveyed in three parts aligned to the three very different nations traversed, a tale with one foot in myth and the other in a still all-too-recognizable sociopolitical morass. Enrique bids his father farewell amidst a spectral thicket of maize. Rosa is courted by a local boy through the window of her parents’ home. Everything indoors warms in the glow of candles and kerosene, yet when Enrique, woken by spasms of gunfire, rushes from his bed into the darkness of a ruined hacienda, the eerie day-for-night photography cloaks all in ashen blues. Taking cues from both the Popul Vuh and the magical realist canon, a number of nature-derived symbols imbue the proceedings with enigmatic pathos. The uncanny resides alongside the real without pronounced differentiation or unneeded fuss. As the setting moves northward however, the real will gradually crowd out the uncanny, until the mystification, suffering and harsh electric light of the real is nearly all that remains. 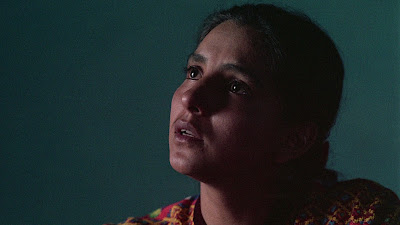 El Norte is unusual in that its precarious earnestness is compellingly offset by its unannounced bursts of brutality, its mischievous, very Mexican humour, its subtle incestuous overtones, its almost pathological insistence on authenticity with regards to location, language and personae, and its unwillingness to redundantly polemicize on the injustices meted upon Rosa and Enrique as they abandon their devastated village to journey through Mexico and into the US to seek safety and work. As nurtured by director Gregory Nava, his co-scenarist Anne Thomas, and his astonishingly inventive cinematographer James Glennon; as embodied by the Mexican and American landscapes, the valiant cast and the experiences imprinted on their gallery of atypically cinematic faces; as contained and shaped by the limited budget and ideological rigour; El Norte assumes an oneiric, organic, striking and at times pleasingly oddball form. 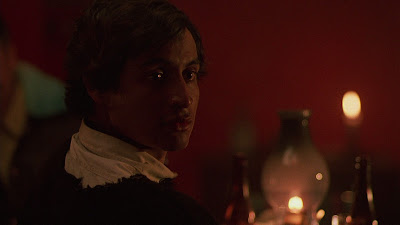 Several scenes, some laughable in their melodrama, feel as modeled after telenovelas as the literary sources to which Nava pays homage. Yet the sincerity of Gutiérrez and Villapando, both very young and unseasoned at the time of filming, is disarming and rife with a flurry of emotions. Villapando’s silent film star saucer eyes convey such a distinctive naïveté, even when he learns to lie in English or, hilariously, talks a blue streak in Spanish in an attempt to sound like a Mexican. Rosa and Enrique are not so much incorruptible as they are perpetually stupefied, and their determination to move northwards—even when crawling through narrow, corroded drainpipes infested with rats—is fed by a pure, youthful faith in destiny.


‘In the Service of Shadows,’ the hour-long documentary on Criterion’s two-disc standard and blu-ray editions of El Norte, tells the story of the movie’s creation, which proves to be nearly as fraught with danger and buoyed by relentless resourcefulness as the movie itself. The indigenous extras who didn’t know what a movie was and subsequently were offended that they should wear costumes; the hostile Chapanecos driving the skeleton crew out of town; the Mexican military who held exposed film reels for ransom, eventually paid by Nava’s father, who smuggled $30,000 into the country in his cowboy boots—the fascinating stories connected to El Norte’s production are too numerous to recount here.


Another standout supplement is Nava’s student film ‘The Journal of Diego Rodriguez Silva’ (72), which dramatizes the final days of a poet displaced in the midst of civil war. It is graced by Nava’s attention to architectural detail and the likely influence of photographers Tina Modotti and Edward Weston. It’s an essentially meditative film, low on drama, rich with locale and haunting imagery and strange moments such the one where Rodriguez Silva comes upon his first corpse, circling it before carefully placing his hand upon its back as though to sense how much life might still linger within. From the little about Nava’s career I could glean, it seems like, despite a long-time affiliation with J-Lo, the guy was never able to fulfill the promise of these early works. Perhaps the conditions of American independent filmmaking at the time, however difficult, brought out the best in him. Or perhaps it was the simple fact that, like the dazzlingly talented Charles Burnett, Nava’s special interest in America’s marginalized failed to attract opportunities.